Tatoo is a kind of Rosetta Stone when it comes to Topps.  It was the first bubble gum product they produced after the introduction of Bazooka and it also, in a later production run, the first larger sized penny tatoo tab marketed by the firm.  It also figured large in a key promotion run by Sy Berger, then just a fresh-faced kid off a GI-Bill education at Bucknell, eager to prove himself to the Shorin's.

Tatoo premiered in the summer of 1948, a couple of months ahead of Magic Photos.  Sold in something called a tourist pouch at first, a sort of satchel-looking package that--I think--held ten single tabs and sold for a dime.  Originally marketed as a party favor or gift, the original wrapper was also the first of its type for Topps as the reverse held a somewhat crude line drawing with spot color made of vegetable dye and primed for transfer to the skin of the lucky recipient with the application of a little water.

The party box concept would later be revived for Bazooka and if I had to guess, was used for three purposes:  1) to allow Topps to sell a penny product (Topps Gum), a nickel product (Bazooka, which was only a 5 cent roll in it's first two years of existence) and a ten cent product at the same time; 2) Not to step on the sales of their very successful Topps Gum and 3) to allow (I am surmising)  the insertion of a contest entry form that was used to gauge the response to the product and which also served as a springboard for a Bazooka promotion.  Now, having never seen anything other than a fairly grainy photo of a tourist pouch, this last bit is a leap of faith but it's a theory I believe is highly probable.

Here is a scan of the tourist pouch packaging.  This and the other two black & white scans in this post are taken from Chris Benjamin's The Sport Americana Price Guide to The Non Sports Cards No.2, as essential a hobby guide as there is, as I have been unable to find any pictures in color (or any, period). 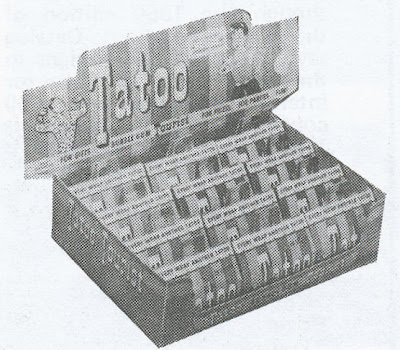 Strange presentation I know but it may have been exploiting a national travel trend.  The story is that the 1948 Tatoo wrapper can be identified by the text instructions on the front and I would agree.  I do not have a '48 in my possession yet but presume it is on the slicker paper stock used for the tatoo issues of later years.  The scan below is courtesy of Todd Riley:

That measures out at 1 3/16" x 2 5/8" (NOTE 9/10/11:  Actually, it doesn't measure out that way.  Time trip to here for details), and would be wrapped around a slightly wider (the ends would stick out) piece of foil-wrapped gum, just like Topps' changemakers.  You can also see the little rip at the top, which was a result of the production process, which utilized equipment that also produced the Topps Gum tabs.  It is thought 100 subjects comprise the set.
1949 saw a reissue of the product, this time in a wrapper with nice graphics showing how to apply the tatoo and sporting a cleaner look with a little more pizzazz:

That wrapper is the same size as the one from 1948.  Here is an interior scan, showing the basic artwork that adorned the issue:

The '49 tabs were sold both in vending machines and on countertops and I believe there were six colors of gum that could be found once the tab was unwrapped: 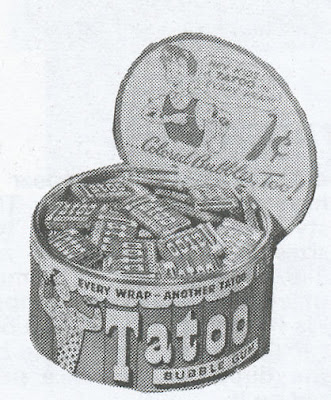 There was apparently also a box with an added Carnival moniker (possibly due to a tie-in with Ringling Brothers Circus) just to confuse things: 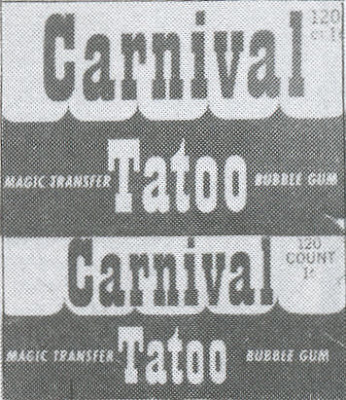 Topps must have added additional subjects to the reissue based upon the contest they ran but no full checklists exist.  That is not a compilation task I would think easy should someone decide to undertake it.
In 1953, after Topps started growing the size of their cards, yet another reissue of Tatoo occurred.  This time the wrapper stayed the same as the one from four years prior but saw increased dimensions of 1 9/16" x 3 1/2", which would become a very standard size for tatoo/tattoo issues in the future:

I can't grab a good scan but the '53 box dropped the Carnival branding.  The set is described as 150 subjects but who really knows?  Topps would be more occupied with producing cards for the next two or three years but began a long run of tattoo issues starting in 1956.
Posted by toppcat at 6:55 PM

How different were the tattoos themselves from year to year?

I am not really sure but would guess they kept some and made new ones for each reissue. The set was originally advertised as having 100 designs and the last reissue in '53 was to have contained 150.