I've had a little bit of time to do some more digging on the 1968 Topps 3-D prototype card of Brooks Robinson, discussed most recently here.  Of note, Friend O'the Archive Ted Boyd has advised that the type of Orioles patch on Brooksie's sleeve dates the photo to 1962 or earlier. This is not an unheard of date spread for Topps.  My guess is that the prototype was originally developed in the winter of 1966-67, a period where Topps was focusing intently on non-traditional products, so that's a 4 or 5 year gap between photo and production.

A digital photo of the back, courtesy of Josh Alpert, showing the Huggins & Scott prototype proves it is very sheer: 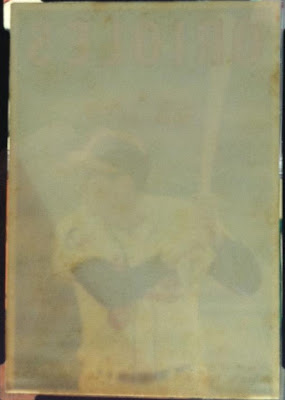 It almost seems like the back was skinned off but it's probably just a different material than the backing of an issued 3-D card.  More than one material may have been tested or pitched to Topps. Here is the front again, in another photo provided by Josh: 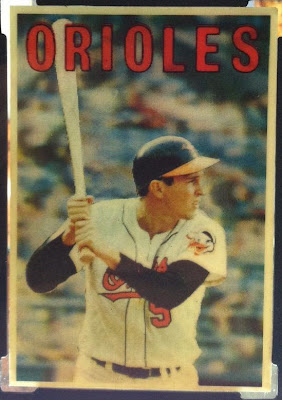 The above example is the uncracked one, of course. The material of the card with the crack is unknown at present, although I am working on finding out its composition.  However, there may b ea third example out there and it's one that helps tie the cards in to Xograph, producers of the 3-D cards that actually amde it into packs. Bob Lemke alerted me to the fact a picture of a version with a stamped reverse is shown in the 2011 Standard Catalog of Baseball Cards.  Sure enough, it is: 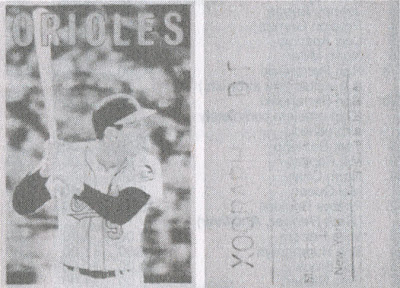 It's a little faint but you can see the word XOGRAPH stamped atop some wording similar to that found on the back of some later production proofs.  It's also hard to see but I don't think that is the cracked version of the card, which I recall had a Beckett connection and would not necessarily have been in the competing Standard Catalog. Rob Lifson of Robert Edward Auctions also passed along his opinion as to provenance:

I have never had this card myself but have seen images and heard of it. I think the description as a prototype for 1968 Topps 3D sounds reasonable, and that description carries a very broad brush. Xograph in Texas produced the 1968 Topps 3Ds for Topps and it is likely they made prototypes prior to their small production run. It is speculative, but it certainly seems reasonable that this is what this card is. The fact that the photo is earlier would not preclude them from using it in 1967 or 1968, so that all alone wouldn’t bother me. I’d like to know the provenance, as I’m sure that would answer all the questions, but my best guess is that this really was produced by Xograph (I don’t know if they were the only ones producing this “3D’ product at the time, or just the only one producing cards – if they were the only ones offering this product due to technology patents etc that could probably be looked up and if that is the case would also be extremely supportive). Whatever it is, it does not appear to be intended to be a finished product at all (and that is why there is no Xograph company attribution; even the 1968 Topps 3D cards say Xograph, not Topps, except when hand ink stamped on reverse identifying them as samples). The borders on Robinson look fairly narrow and of course the corners are square. I wonder if this is even machine cut (I can’t tell from the image but if it is not machine cut that would also be consistent with it being a prototype.

The projection on the Standard Catalog card matches the cracked one, i.e. "Nessie" does not have a tail (see my prior posts for this part of discussion).  I plan to revisit the projection comparisons at some point but will wait a little bit until I can obtain higher resolution scans, hopefully once Huggins & Scott gets their auction up.

All of this means that there are potentially three versions of the card:

where 3) is a distinct variation from 1), with 2)'s category presently unattributable.

The picture of the card caught my eye as the photo of Brooks looked familiar. I think I've found the original photo that was used to make the card: