Sitting here at the main Topps Archives Research Complex instead of being at the National doesn't have to mean  all sorts of oddities are being missed by yours truly.  Au contraire!  Not one but two e-mails bearing rarities have been received on this very day.  I was originally going to wait to post about both but one is awaiting a key fact and I just had to show the other as it's one of those once-in-a-lifetime type hobby moments.
New reader Craig Williamson sent along scans of all ten the of the uber-rare 1971 Topps All Star Rookies, an embarrassment of riches and then some!  The set has been known for some time and they have always been considered to be proofs, possibly for some sort of Rookie Banquet favor.  However, a careful review of the known history of the cards and the well-composed scans sent by Mr. Williamson lead me to believe they are most likely an internal "pitch" creation, not unlike others we have seen here in the past (scroll down a little to see).

The cards are affixed to much larger pieces of cardboard, which is the detail that pushes them into the internal pitch category. Here is a long shot of the Carl Morton that shows this: 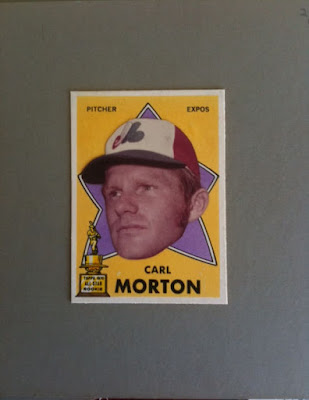 Note the pencil or light pen notation in the upper right corner.
The cards are described in the Standard Catalog as being Standard Size and affixed to cardboard measuring 6 1/2" x 9 1/2".  Unfortunately I've got to do some serious editing to the files as Blogger is rotating them 90 degrees no matter what I do right now.  So I will work out the kinks and post the full visual checklist next time out.
Posted by toppcat at 9:07 PM

Email ThisBlogThis!Share to TwitterShare to FacebookShare to Pinterest
Labels: 1971 Topps All Star Rookies