The many mysteries of Topps Production and Marketing seem never-ending.  Recently, Friend o'the Archive Howard Schenker sent along a scan of some packaging for a toy issue called Fighter Planes.  The box scan he sent is well-executed but the set itself is not well known so sales must not have, ahem, taken off: 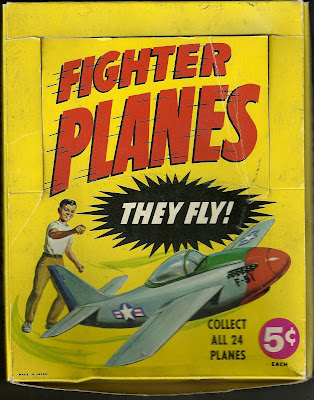 That young lad looks like he could step into an episode of Leave It To Beaver. The pack is essentially a reproduction of the box artwork:

There is a handy checklist on the back and we can see the pack is an envelope and not a true wrapper:

As always, the indicia is helpful:

While the artwork just screams 1950's, the type face and Made In Japan notation put this into the 1960's to my mind.  Just what year is unclear, although the Non-Sport Archive wrapper reference indicates 1957 and while some of the dates in that book (which is quite useful and well illustrated folks) are off by a few years, the attribution must have come from somewhere.

Woody Gelman kept a wrapper example in his files: 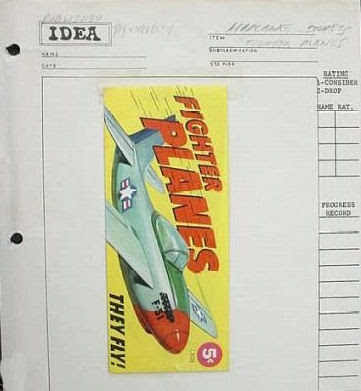 And in this scan from the aforementioned Non Sport Archive, we see a ten cent version was issued at some point:

There is no extant scan but Chris Benjamin, in his The Sport Americana Price Guide to the Non-Sports Cards, No. 4 writes that the ten cent pack has a Duryea credit, which puts it at 1969 or later.  Benjamin also shows only twelve planes for the later issue's checklist, just half of the five cent version.  I want to dig some more and see what turns up on these planes.  If you have an idea, drop me a line.

According to the box illustrator, Norman Saunders, this was a 1967 (test?)issue.

While the Saunders site is really terrific, some of the dates on there are suspect.