Not too long ago I took a look at the early months of 1969, when Topps transitioned their manufacturing indicia from showing Brooklyn to Duryea.  The move to Duryea was completed in early 1966 and Topps designed a new logo in celebration.  Production code dating would soon follow, likely as a way to help coordinate efforts between the creative staff in Brooklyn and the packaging plant in Duryea, with a side trip to Philadelphia for printing.

The new logo, all in lowercase and with a distinctive curved "t", is well known and one I think is a minimalist classic:

Trademark records indicate Topps used this logo for the first time in late 1965, although I have yet to find any 1965 wrappers or merchandising showing it and it was probably phased in slowly, first appearing on letterhead and marketing information for the 1966 sets.  Topps then began using the logo on their packaging in early 1966.  You can see the '65 baseball wrapper uses a slightly stylized verison of the old Topps lettering that dated back to 1938 and the founding of the company: 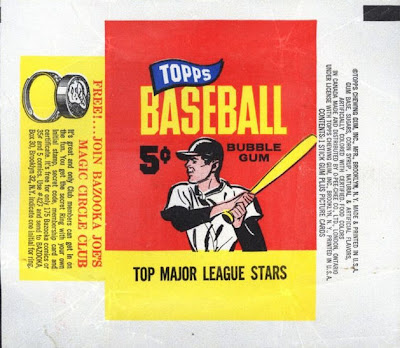 The logo then transitioned to a very generic looking one by the time the football cards hit the shelves in late summer: 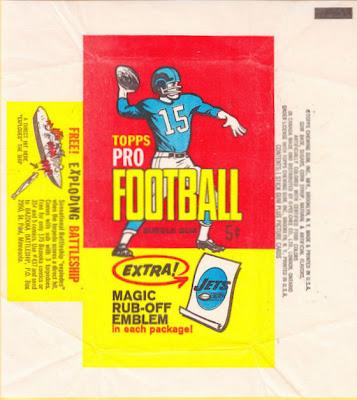 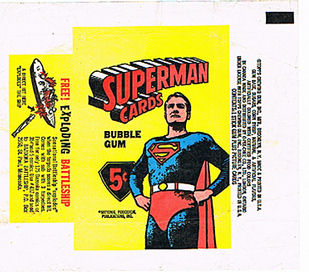 That Exploding Battleship was being pushed all year by Topps, by the way.  For some reason, the massively successful Ugly Stickers had a wrapper that was devoid of any Topps logo as well: 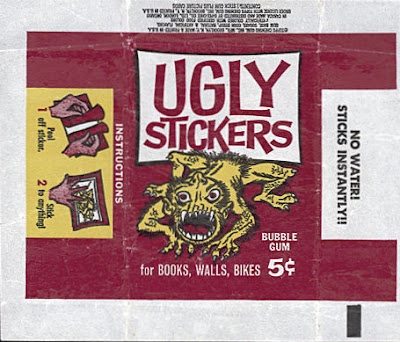 By 1966 the new logo was featured prominently on the baseball packs, which also introduced an early version of the baseball design that would be replicated many, many times in future years. 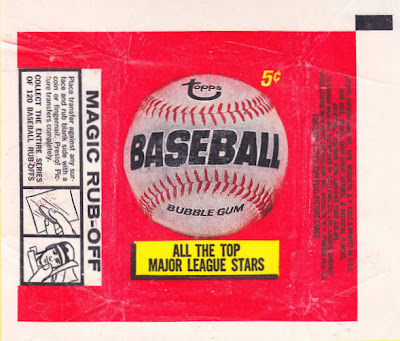 Some old branding would remain though, such as on this header card on the 1966 Rak Paks:

That's from www.baseballwrappers.com by the way-go give 'em some love!  I suspect Topps were using up old header cards and of course the branding/logo wasn't even consistently deployed as this 1966 wrapper shows: 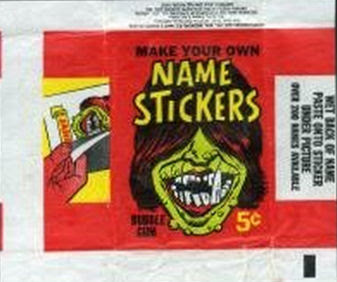 It's Topps, so there will always be inconsistencies but by the time the '66 football season had rolled around they were on top of it: 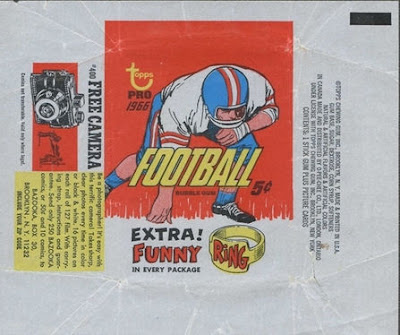 It's around this time that the production codes started to be developed and used.  As I've said previously, those codes require some serious contemplation before they can be dissected but it will happen eventually.
Posted by toppcat at 7:42 AM