I am really sorry to have missed this year's National in Chicago.  I went to Baltimore last year and had a blast, visiting in person with online buddies I had never met before and wandering the convention hall in search of various treasures.  There are so many great cards on display it's hard to suck it all in.

This year one of the true rarities being showcased is something previously looked at here, a 1968 Topps 3-D prototype of Brooks Robinson, which Huggins & Scott will be auctioning soon.  I was lucky enough to receive an iPhone photo of it from Friend O'the Archive Josh Adams and after a close look-see, I believe it is a second example of this elusive card.

Produced as a prototype for what became the '68 3-D set, the Robinson card looks something like an inverted '67 regular issue card.  I'll show the previously known copy first and then the new one. Ignore the brightness as I have no idea of the camera or scan settings used originally. 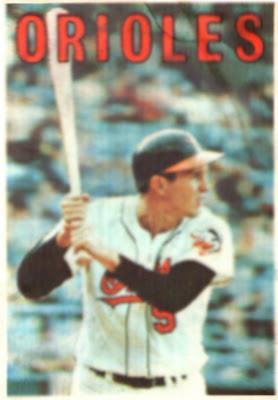 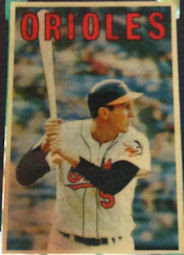 In addition to the crack that's on the previously known example (it runs at a 45 degree angle between the O and L before cutting horizontally across the L and into the middle of the E, then turns 45 degrees again and exits onto the right border parallel to the brim on Brooksie's batting helmet), there are some cropping differences.  The most noticeable ones are the distance between the bottom of his belt buckle and the bottom edge of the card (there's more, uh, length on the newly found version) and the little blob to the left of the bat just below where the label would be if you could see it.
Rather than give you a couple of crotch shots, I'll show the blob, which I have christened Nessie, for reasons that will soon be clear:

Looks like the Loch Ness Monster, right? That's from the version with the crack. The outside border on this card is thin in the scan but it's there. Now check out the other card's Nessie:

It's grown a tail, stretching left to the border!  There are other cropping differences as well but I don't have high-res versions of either card and they are hard to show here.

I am hoping for a back scan to make its way here, it may have some more information on it.  Wish I was there to see it in person!
Posted by toppcat at 8:13 PM

This card also pictures Brooks Robinson in a batting helmet with a full-sized brim, rather than the sawed-off helmet he usually wore.