This set of 18 black and white cards (yes, I am on a B&W roll of late!) does not bear any Topps or TCG indicia but the typography and seemingly good hobby intel over the years pegs it in my mind.

This Frank Robinson card is from the collection of Bob Fisk: 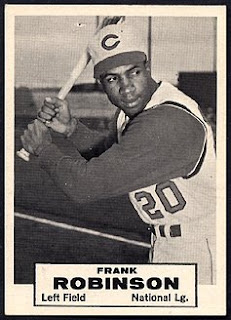 You can see staple holes in the upper left-to-center of the card; I would think one full set of these has staple holes, or two at the most. Why? Because I believe such examples came from the Topps internal archives, probably through Woody Gelman and Card Collector's Co. Topps would keep an archive copy in a book, sometimes with a matched display of fronts and backs stapled or taped to a page for executives to refer to. Woody's m.o. was tape (and I think he might have had his own archives in addition to the official ones) so maybe the cards came from another Topps big wig. If front and back copies of each were included in the reference material, then it stands two copies of each card would have the holes.

It's good Bob and a few other sources have scans of these-I doubt I'll ever own one as my estimate is that from 2 to 4 copies exist at most for any player. A lesser conditioned Leon Wagner (vg-ex I would say) than the one below went for a little over $2000 about three years ago in a Ebay auction. I don't know where this scan is from though: 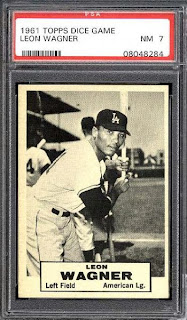 A vg-ex Mantle went for almost $25,000 a while back. I don't think it was this one, again from an unknown source: 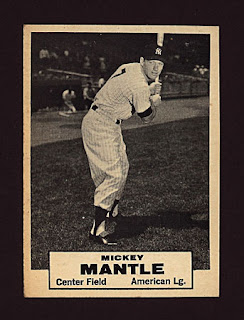 The back of Mick's card gives an idea how the game would be played: 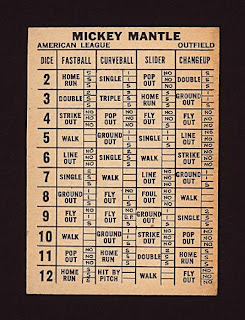 As there are 18 cards in the set with seemingly matched pairs of AL and NL players by position, I would surmise the intent was to sell the entire set, with two regular dice, one die for pitch selection, another for something else (those little trifurcated boxes must be significant) and possibly some score sheets, as a self contained toy. I would guess 29 cents at retail would have been the going rate.

Here is a Willie Mays front/back combo as well, from a Mastronet auction a few years back. 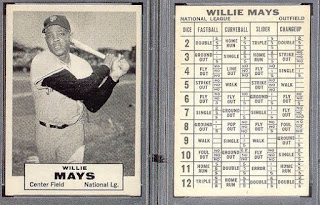 Did the cards ever make it to a full retail test? I am not sure but it's possible as the presence of vg-ex examples could indicate handling by purchasers. The test, if it made it that far, must have failed. It's also quite possible the cards only made it to the final proof stage. I seem to recall an uncut sheet existing at one point that may have been cut up for singles but have no source to confirm that.

No matter how they entered the hobby, these are some of the rarest cards Topps ever produced. PSA has one registered set (50% completed) with a number of 1 grades (possibly for staple holes, I do not know) and SGC has zero. I would say examples only come up for auction once every two years or so on average. I am in awe if you own one of these.
Posted by toppcat at 11:41 AM

Its a shame that test issues like this never made it out to the general public. Even though the pictures are B&W, the design actually works well and the cards look great.

Thanks for sharing another great test issue and providing the background on this set.

It looks like the game is played this way:

The pitcher chooses a pitch. Either Fastball, Curveball, Slider or Changeup.

The batter rolls the two dice. The result is checked on the pitch that was thrown and that is the result.

The three little boxes on the side show which runners advance. Top runner is on first, middle on second and bottom on third. The key for those results is:

S = Scores
NO = No Advance
1 = Advances One Base
2 = Advances Two Bases
Blank means the runner advances if forced by the walk.

I'd love to see the backs of a full set of these cards (if one exists) and try to play agame!

I know this is way after the fact but the Mays card is the exact same as his 1970 "deckle" card. So there is no doubt the set is Topps.

For many of the '61 Dice Game cards, the image used is the same as the B&W side picture from the Topps 1960 regular issue set. It matches for Drysdale, Kaline, Kubek (I think), Mantle, Mays, Musial, Brooks Robinson, and Leon Wagner. It doesn't for Earl Battey, Camilo Pascual, and Frank Robinson. The rest? I have no clue, although the 1960 side images for the others seem like they'd work well.