One of the rarest Topps test issues of the 1960's is also one of the most sought after; a terrible combination if one is looking to even buy a single type example for one's collection. Yes, if you want to find something on most advanced collector's wantlists, look no further then the 1967 Giant Baseball Standups. Obtaining one of these has been at the topp of my wishlist for a long time now so I must be content with spurious scans from the wee corners of the internet until one is safely ensconced in my collection.

There are 24 oversized Stand-Ups in the set. As you can see from the test wrapper and instruction sheet (courtesy of a recent Leland's auction) these are black bordered headshots designed to be punched out and inserted into a base (also punched out) for display. 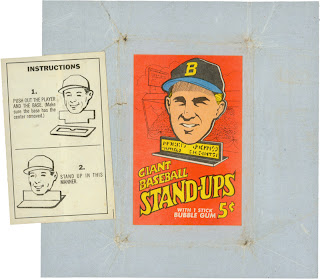 The instruction sheet was actually a sticker that closed the flaps on the wax pack, a little known fact Rob Lifson imparted to me. The wrapper shown above sold for over $2,500 in November of 2008, which shows how rare it is, even with the somewhat iffy condition it is in. I would think two cards came in each pack due to use of the plural. 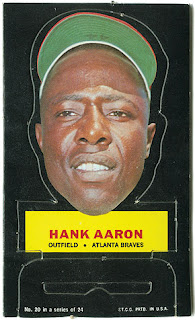 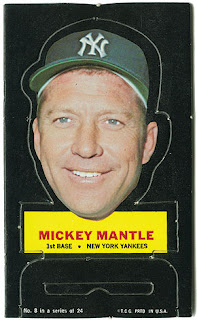 That little V notch atop the Mantle is somewhat common to certain Topps test issues that do not conform to standard size or thickness (and these are pretty thick). 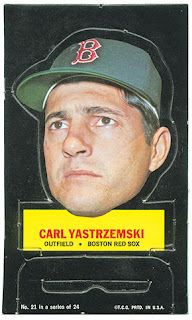 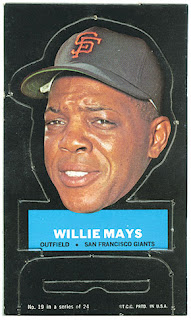 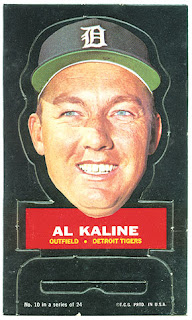 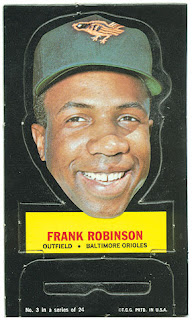 There's also a few guys who should have been Hall of Famers but are not for various reasons: 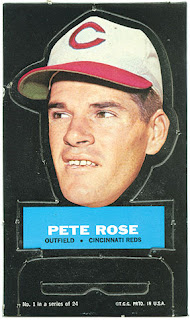 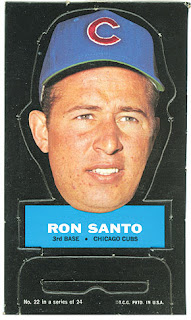 I think one of those two guys above will eventually get in.

Now if I ever do find an example, it will likely be a lesser light: 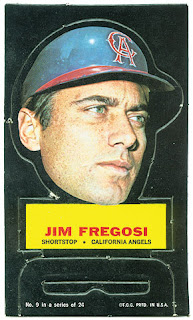 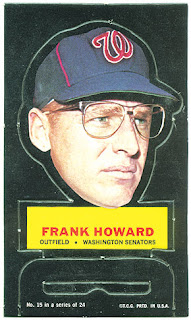 But most likely one of the least likely players in the set will be the one I snag: 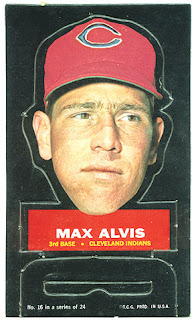 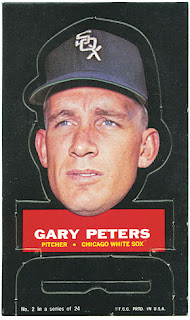 For the record, the other 12 players in the set are:

If either Rose or Santo make the Hall, then exactly half the set will be comprised of Hall of Famers.

There is also a proof version on thinner stock of all 24 players, that does not have the die cuts.
Here is a scan of one, from the staggering collection of Bob Fisk: 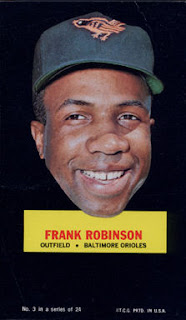 These generally sell for a little less than their metamorphic counterparts but even a common in decent shape will set you back a grand or so. That is, if you can find one.

The talented Mr. Lifson also advises that gum damage can occur to these cards from when they resided in the pack and that examples with bits of black scrapbook paper still adhering to their backs came from Woody Gelman's personal scrapbook.

As the noted oddball dealer (I am referring to his inventory, not his personality) Steve Werley once said about these cards, if you see one, grab it!
Posted by toppcat at 6:18 PM

Wow, I've never heard of these before. Cool stuff!

Man....why doesn't Topps release a set like this now?

One of the things I find curious is the none of the card companies have gone back to concepts from the test sets of the 60's/70's/80's.

You can bet that if die-cut stand-ups like these were a insert in Topps Heritage, for example, they would be highly sought after.

Beautiful scans! This is the first I've seen of these. Thanks for sharing the information and the pictures.

Aren't they great cards? Topps has thrown away their heritage; I wish a collector had bough them at some point, much like how the Parkhurst name was licensed for a bit twenty years ago. Ah, well at least we have the goodies fro the past!

Hi
NIce blog about hollywood stand ups i like it Generally this tool comes under the idea of a white and black board which is used for synchronization during the shooting of any movie or video.