It's snowing here outside the Topps Archives main research complex, so I am in a chilly state of mind and thinking about hockey right now.

After baseball, hockey probably has the most fanatical collector base in the hobby. I just picked up a great book called the Vintage Hockey Collector Price Guide, compiled by Bobby Burrell. It's a pictorial reference book covering about all you could think of when it comes to hockey cards and it is the best illustrated hobby reference I have ever seen-a true work of art with hundreds of wonderful color pictures. It has put me in a mood to go after some hockey types and I just picked up two nice cards.

The first is a 1954-55 Topps Hockey card. These were only sold in Canada it seems, probably hitting the market just after New Year's 1955 as Parkhurst used to release their cards first, in the late fall, when the season started. The cards, 60 in number, feature what I gather to be oil-painted photos and they are stunning. I chose this one as it has a cloud of ice being kicked up by Ray Timgren of the Chicago Black Hawks. 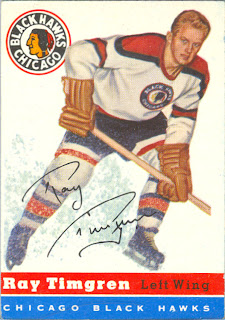 The back is nice too. 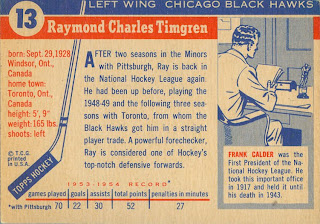 Topps did not produce another hockey set until 1957-58. I am not sure why but Parkhurst missed a year in there too, so some kind of licensing problem may have played a part.

I also picked up a 1968 O-Pee-Chee Push Out along with Mr. Timgren. These were inserts in the 2nd series OPC hockey packs in 1968-69. Instead of being peel-off stickers, once you popped out the puck you had to moisten the back to get it to adhere to something.

This could only be improved if his nickname "Gump" was on it instead of his given name. What a classic shot of a hard-nosed goalie! 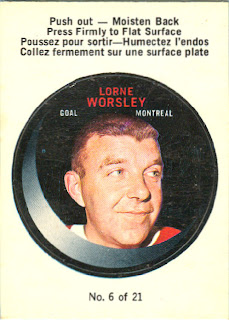 These are the first hockey cards I have bought in about 35 years!
Posted by toppcat at 6:05 PM