In 1977 Topps hatched a plan to print and sell football cards in Mexico. This is not surprising as Topps tapped into the Venezuelan market in the late 1950's with their baseball cards and also produced some other Latin American themed sets in the early 70's.

The entire '77 football set of 528 cards was printed, mostly in Spanish and sold in five different and very colorful wrappers. I snagged this scan from Ebay the other day: 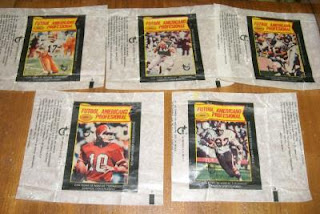 One of the players pictured is that fulminating football felon, OJ Simpson.

Unlike their American counterparts, the Mexican cards were loosely perforated. You can see the nubs in this scan: 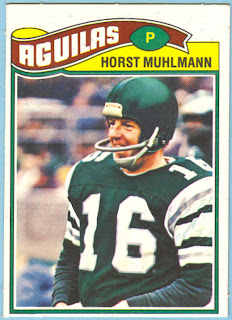 I like the fact a German born soccer player is featured on a Mexican adaptation of an American card! The back is not quite all in Spanish as the yearly totals have retained their Anglicized team names: 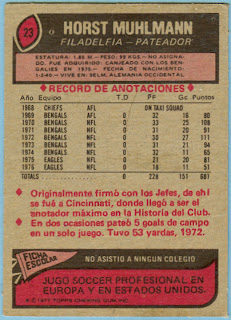 Topps also produced a Mexican version of the scarce Six Million Dollar Man set, I just can't get a handle on how tough it is to find. It's a fairly tough set in the US (test issue only) and the Mexican version seems much harder to find than these football cards but it seems like these can be bought at a reasonable price. I stole this from Ebay after I made the original post: 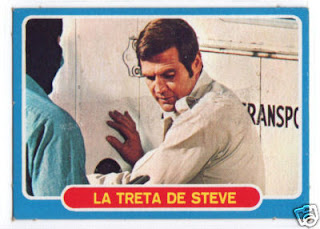 The best part of the whole thing is the title in Spanish: El Hombre Nuclear! How great is that?! There may have been inserts included in the packs as well, I am not certain about that though.

A Mexican Star Wars set was also sold, comprised of 66 blue bordered cards which I presume mirror the first US series. They look like this, also a swipe from the 'bay : 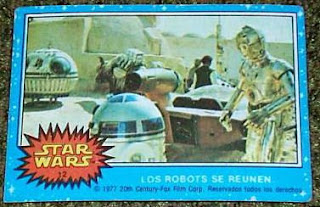 The football cards have their own peculiarities and while you can find many of the cards with relative ease, some are short printed and there are other problems that render some cards difficult to find in high grade or with proper centering.

There is a fabulous website covering the Mexican Football cards in detail. You can visit it here, tell 'em the Topps Archives sent ya!