War cards were a big Topps staple in the early 1950's. World War 2 had ended a scant half a decade earlier and unbelievably yet another conflict, the Korean War, was raging. The boys in Brooklyn took advantage and issued a large set of cards called Freedom's War over a two year period from mid-1950 to mid-1952. I won't get into all the permutations here but there are card stock differences, single cards, two-card panels, three price points for packs, a series of die cut tanks that lost the cut and then were pulled completely, at least three separate printings and a bunch of other stuff I'll get into in a really long post someday. 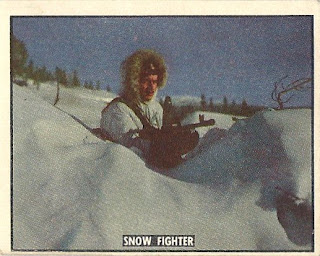 Come on, how great is that shot? The backs are typical Topps fare at the time: 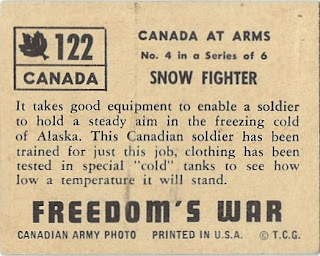 Today though, I want to look at the penny wrapper, which is outstanding: 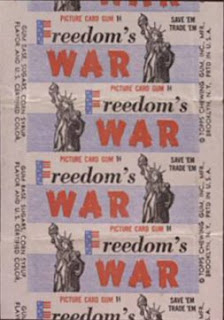 Topps was likely trying to up the patriotism quotient in their battle with Bowman, a company known for its staunch pro-government stance.
Posted by toppcat at 5:20 PM