Put on your bowlers lads, we're going to the UK today!

Topps made a corporate decision in the 1950's to expand their product lines internationally, first reaching into Canada then later Venezuela in this hemisphere. By the end of the decade they had set their sights on A&BC Chewing Gum of England and would further their quest into Holland, Israel, Australia & New Zealand by the early 60's.

The Topps/A&BC alliance eventually became Topps UK in the mid 70's but used the A&BC brand exclusively before that. After World War 2 A&BC would be to kids in the UK what Topps was to the young 'uns in the US. There is an excellent treatise on A&BC on Nigel's Webspace, which is also a megasite for "Footballer' cards issued in the UK. I didn't link to the article but it's at the links near the bottom of the page; it's more fun to explore his whole site anyway.

My primary interest in A&BC and some of the other international Topps affiliated brands from the mid century goes well beyond just the footballers but today I just wanted to share a couple of nice looking cards. There will be much more on A&BC as we press forward this fall.

The 1970 English Footballer set looks a little bit like the 1967 Topps Baseball Cards I think: 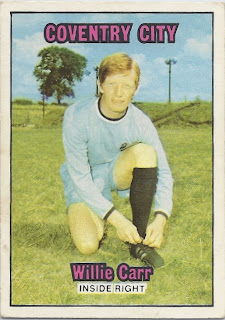 The A&BC sets are often referred to by their back colors. Mr. Carr would be an "orange back":

That is a coin rub feature in the lower right corner, which is a byproduct of Topps' US baseball sets. Many designs on the overseas cards over the years were based upon stateside graphics, sometimes exactly so and there will be a comprehensive feature on such similar looking pasteboards soon.

A&BC's first set of footballers was issued in 1958, around the time Topps affiliation with them commenced. The cards featured players from the English Football League First Division, the major league version of soccer on the Isle. They expanded to a second set featuring Scottish Football League players in 1962 (a very rare set) and the Scottish cards were issued separately on an annual basis (in most years) into 1980 I believe.

The Scottish cards were identical except for the back color. Here is a very dramatic looking card of the alliterative Dixie Deans: 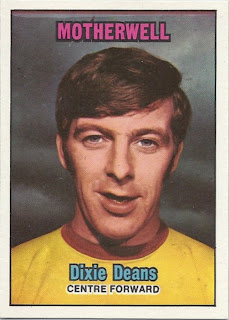 The Scottish '70 Footballers are referred to as Green Backs:

Those full bleed backs must really do a number on the mint freaks out there! By the way, these UK cards measure the same as standard sized Topps cards of the same era, or about 64 mm x 89 mm. Not all cards are made equally however; there are some size variations with A&BC cards even on sets they replicated otherwise exactly from the US.

You can learn more about A&BC cards from a handy little booklet put out by the London Cigarette Card Company: 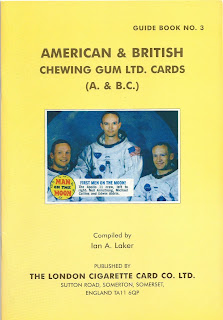 Like I said before, there will be more on A&BC (and other Topps concerns) around the world as the Archive goes global. There are test issues and short prints, mysteries and double prints just like in the US, so there's plenty to look at laddies!
Posted by toppcat at 7:19 PM

Carr and Deans look like they're taking part in a Monty Python sketch!

When you think how few of these were made compared to toppd baseball - it's amazing.

these are just coming to light - finding high grade Topps UK cards are a premium.

With the huge international fan base of Manchester United, Liverpool, Chelsea and Arsenal there will be a fight to find these.

I can only imagine how small the Scottish card press runs must have been; I think the English cards can be found readily although condition-wise it is a challenge and there is spirited bidding on older cards from what I have seen.

I only have the two shown right now-I wanted to get a couple reference copies and that was what those examples represent. I'm going to try and obtain a type run next year of both the British and Scottish main sets and also the Cricketers but am working on compiling scans at the moment for the Archive.

Let me know what soccer cards you need - I have a very large collection of scans.

Anyone know how A&BC distributed the Elvis set in 1956? In packs? In gum/candy machines? In card machines? Thanks.
Seth in New York (Rockards@aol.com)

i have a&bc , topps & topps nfl on my site ( not for sale just my own collection ) at www.tonyswebspacer.co.uk

Tony-nice site, I'll be posting more on A&BC, Scanlens, Allans & Regina this year and will pop a link in next time.

A bit delayed on the next set of A&BC posts folks-lots of topics to post on right now and there is a bit of research still to do but fear not!

I have about 100 of the Scottish leauge cards from the 70s and 80s. If you know anyone that wants to buy