Today we have a three for one deal, which is appropriate as the discussion centers on a favorite business strategy of Topps in the golden days-the product dump.

Starting in the early days of card production and running at least into the mid 80's, Topps would offer, on a seasonal basis, repackaged and bargain priced cards and assorted confections starting with Hallowe'en, then changing the mix at Christmas before coming out with something around Valentine's Day, the latter using a slightly different strategy which will be explored someday in further depth. A "Gum & Fun Assortment" was one description used but these are commonly known in the hobby as "Fun Packs" or Fun Paks".

Take a bunch of overstock, bag and/or box it with various types of gum and then push them as Hallowe'en treats or Christmastime Stocking Stuffers and you have all the makings of a Fun Pack. Many times (but not always) the cards sold within would be re-wrapped in a special wrapper that would generally hold between 1 and 4 cards. I believe in the earlier incarnations that ran through the 1960's that most of these held a single card and since they were sometimes marketed at 100 single card packs for $1, I consider them to be penny packs, at least for purposes of this discussion.

We have already seen this one of these special wrappers here intrepid readers, it held a cello-wrapped four pack of Flash Gordon cards, with gum (an oddity, to be sure): 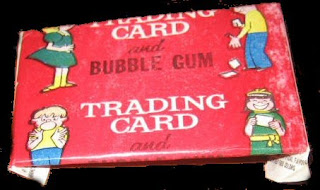 The red "Trading Card" wrapper is confirmed to be from 1965 but there is a credible story the Flash Gordon cards were sold or at least rewrapped in the red overwraps in 1968, so Topps may also have recycled some Fun Pack wrappers from year to year while utilizing a new design either each season or each year (another mystery to be divined as more information becomes available).

Here is a true 1968 Fun Pack, with a Bob Gibson baseball card peeking through: 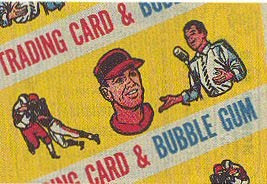 The following two both appear to be from 1969 and Topps mixed up the colors a bit for variety: 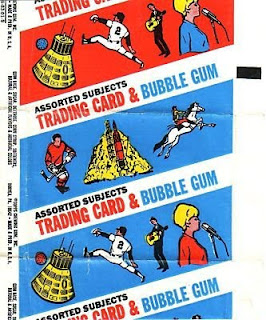 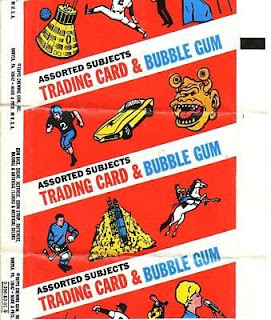 I believe those were from an Ebay auction back a-ways now.

Early Fun Pack Wrappers are not that easy to find and sealed packs are scarce. All I know is, I never once, in all my prime trick-or-treating years (which were from about 1966-72) received one of these among the wax bottles, Baby Ruth's or Smarties that were typical Hallowe'en fare at that time.
Posted by toppcat at 8:03 AM


There's some cruel irony in your never having received any "Fun Packs" for All Hallows' Eve as your postings on Topps' Halloween 'haunts' have been real TREATS.
Thanks for sharing them!!