Topps issued a really nice set of 80 historically based cards in 1956 featuring tales of the American West paired with some stunning artwork and commonly referred to in the hobby as Roundup. The set is also historically significant in the Topps pantheon as they are the last of the large sized Golden age cards produced in the 1950's (2 5/8" x 3 3/4" in size).

The penny wrapper is especially nice: 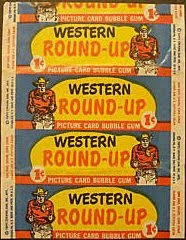 I suspect I nailed that scan from Ebay....The wrapper indicates the set is called Western Roundup but since most (but not all) Non Sports cards are identified by the name appearing on the card the lesser name has prevailed.

There were eight subsets of 10 cards each; here is the one from the Daniel Boone series: 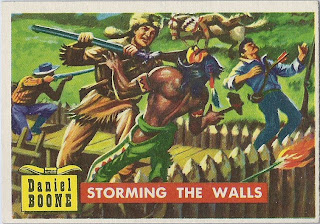 The backs tell a story: 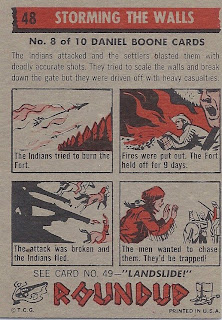 Quite the history lesson on the back of these.

The first card in each ten card series is referred to as a "face" card as there is a nice portrait of the subject to kick things off. Here's another I just nicked from the 'bay: 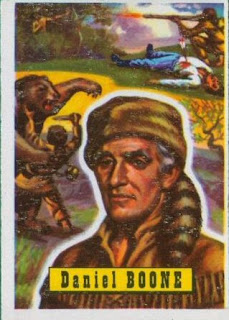 That dead settler with an arrow through his heart is priceless!

The other seven subjects in the series are:

That is a pretty diverse group in that it includes an outlaw, a showman and assorted ne'er-do-wells instead of the usual parade of commonly accepted heroes.
Posted by toppcat at 5:43 PM

This set probably wouldn't be polictically correct today......I love it!!!