I've decided to start a recurring feature here at the Archive I'm naming Penny Arcade, which will riff on Topps penny packs and wrappers. This is partly because I am pressed for time of late but also because I am obsessing over Topps One Cent Wrappers these days (none of which I own, by the way).

Penny packs amaze me as there was somehow enough profit built in that they were worth issuing as late as 1965. Primarily marketed in rural areas back when the gum was considered the star attraction within, penny packs generally used a repeating design taken from the nickel wax packs of any given issue. Think about the profit chain:

All for a penny! Yes, I know the whole structure was based on bulk sales and marketing but it's amazing there was enough for all. Think about it- a 120 count box of penny packs retailed for $1.20!! Well enough Economics, on with the show.

The Outer Limits was a sort of monster-themed version of The Twilight Zone by way of outer space that ran from 1963-65 and then lived on in reruns. Much like TZ, Outer Limits was resurrected years later in much less satisfying form.

Today let's take a peek back in space-time at the penny wrapper from this 50 card set, which was issued by the Topps nom de plume Bubbles Inc. Pretty gruesome, eh? 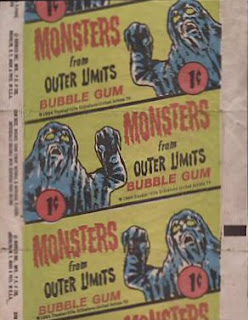 This one's a little dirty-the primary color is a garish green. The cards are tough to find in nice shape with full bleed fronts and backs making life difficult for the PSA crowd. A really nice Outer Limits cards site can be found here and since I am focusing on the wrappers for this series, you can view the cards quite easily offsite.
Posted by toppcat at 10:21 AM