My recent posts on the 1980 Topps Baseball Coins have generated the most interest of anything blogged about here since the 1966 Punchboards had their checklist inflated out of the blue a while back. I'm a little surprised at all the attention but these are pretty rare birds after all and we are not done with them quite yet as another surprise is in store.

Our story begins today with scans of the Reggie Jackson and Steve Garvey coins in their aboriginal state, namely on an internal Topps presentation "pitch" of a type seen previously, and clinches the fact for me that these were internally produced proofs for a set that never got the green light. This set is slowly revealing its secrets: 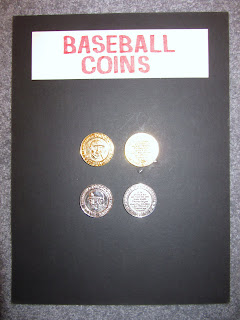 Shown are a front and reverse each of the gold Jackson and silver Garvey we saw here last time out, held on with double sided tape when purchased by our present lucky owner. This particular one predates the Scott Gaynor buyout of a former Topps sales rep earlier this century as it was purchased in 1995, at a flea market no less!

Back in 1980 you didn't use Powerpoint to make a a concept pitch to management, you had the Art Dept. create it for you, at least at Topps. The other metal (bronze) and player (Carew) known in this set probably also had their own board at some point, possibly shared with a bronze Jackson. Here are the back details of our two boys, first Reggie: 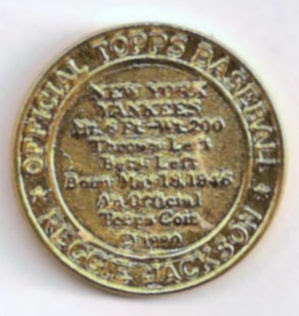 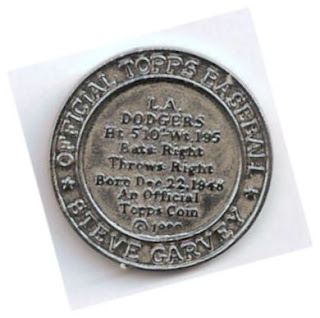 The presently known population of the coins is small:

There is a credible report of a silver Carew and a possible third bronze Reggie. Some have a hole punched in the top, and I will post scans of these if I can get them. I am thinking there have to be at least two of each coin produced so a front and back could have been mounted for the pitch but still don't know if each is player minted in each type of metal, especially since only the Bronze run features all three at present. So we still would like to find a silver Jackson and gold Carew and Garvey. Given possible mixes and matches in the presentation, I think about four of each metal/player would have been produced in this type of scenario. Topps must have had an outside vendor cast these. I am also advised they are quite light and do not have the heft of a regular coin.

More to come folks!
Posted by toppcat at 6:30 PM