Before your webmaster decided to go checklist-centric, he posted a while back on the 1957 Lucky Penny inserts. At the time that post was written I did not have a scan of the back of the insert card but thanks to the yeoman efforts of Doug Goodman that has changed: 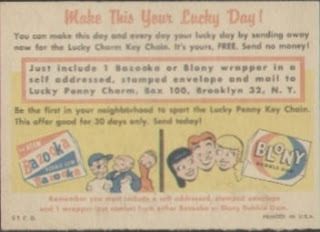 I left the scan so you can see rough cut on the bottom.

Archie, Veronica & Betty were part of an effort by Topps to make the kids from Riverdale as iconic on Blony bubble gum comics as Bazooka Joe and His Gang were on their turf. In fact, in 1957-58 Blony comics featured the Archie comics gang but it would be another decade or so before Archie became a TV star and despite Topps' best efforts, Blony Gum would not last as a brand past the early 60's (save for a later attempt to market it as a twist wrap in the 70's, also a failure).
Posted by toppcat at 4:51 PM

Dang, I wish I'd thought of that article title!