Sailing the Sea of Holes

Ah, what could have been! Friend o' the Archive David Davis, knowing I go weak in the knees for anything having to do with Yellow Submarine, sent along a licensee list for the movie which you can see at the top of this link. While some of the products on the list were produced and some were not, the five licenses granted to Topps immediately caught my eye.

Since Topps made a grand total of zero Yellow Submarine products, it seems they gave us a sea of holes. 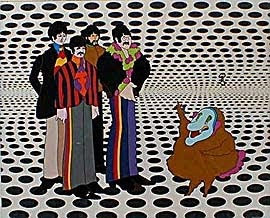 The list is comprehensive and would have made for a great marketing campaign. The five licenses were for:

Perhaps Topps did the research and determined there was not a huge market in their target demographic for tie-ins to the movie or the fees ended up being prohibitive but none of these products ever were even proofed from what I know of it.

Anglo Confectionery released a great set of 66 cards in the UK at the time the movie was in its first run so not even A&BC, the British partner of Topps at the time, made it out the door with a set of cards. The stickers and tattoos would have been colorful affairs and the mind reels at a Yellow Submarine themed set of Flying Things but I would really have liked to have seen some psychedelic posters made by Woody Gelman's crew!
Posted by toppcat at 4:37 PM