A Muddy Waters song and this blog do not often cross paths unless I have Itunes playing as I type. The title above is from "Rollin' Stone" a 1948 composition by Muddy and, as well documented pretty much anywhere you may care to look, is the song which gave the Rolling Stones their name. I must confess to being a bigger Muddy fan; I like the Brian Jones and Mick Taylor era Stones, especially the latter part of the 60's but the lengthy Ron Wood years leave me flat, although his work with The Faces was aces.

In '48 Muddy was really starting to take off in Chicago, although the non-African American community would not really hear of him for a good decade more. Having gone electric a couple of years earlier, Muddy was cresting toward a creative peak starting about late 1951 that he would ride through the decade and beyond. Don't believe me? Check out this spjne tingler with Junior Wells on Harmonica circa 1952.

No worries, I have not switched to a musical format!

In 1965, after having massive success with their Beatles trading cards, A&BC Gum, which was Topps' UK licensee but also created their own sets, issued a 40 card set of The Rolling Stones that seems like it should have been solid gold. However, the cards either were not marketed properly or simply did not sell and while not truly scarce are now reasonably difficult to track down. Nigel, over at his English Football site, believes the cards were a test issue and distributed to a select group of 20 stores in South London and South Wales to see how things would go.

I would think the Stones fans overall were slightly older than those of the Beatles and that may explain the lack of success as they had passed the "event horizon" for this set. Whatever the reason, David Halpen (another Anglophile collector) believes the cards were sold in South Wales on a limited basis. Here is David's image of a wrapper that held three cards, sort of the British version of a penny pack: 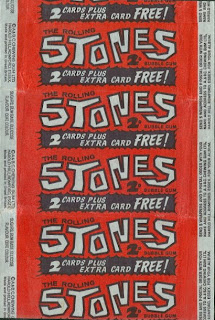 Only a handful of these wrappers exist in the wild apparently. You will see the cards sold for two Pence ("d" for denarius is how that is shown) and I think that was around a penny and a half US at the time, using 2.8 dollars per Pound, with 240 Pence to the Pound). This was all prior to decimal day in 1971!

The cards are really sharp with excellent photography, although why Bill Wyman posed with a cactus is beyond me on this scan of David's:

Backs are sparse, as was common at the time with the entertainment sets of both Topps and A&BC and give no clue as to subject matter beyond the basics (not the same card by the way): 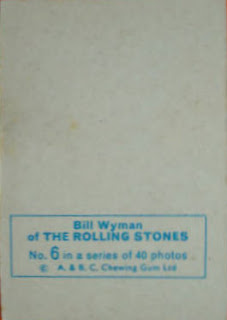 Too bad they are so hard to find; they are very collectible.
Posted by toppcat at 7:19 AM

Email ThisBlogThis!Share to TwitterShare to FacebookShare to Pinterest
Labels: 1965 A and BC The Rolling Stones, Penny Arcade

As part of my A&BC Chewing Gum history pages I've included a reference to these Rolling Stone cards. Douglas Coakley once told me that A&BC used to print up limited numbers of new sets of cards and then issue them to selected newsagents that they trusted as 'test sites'. A&BC were always confident that they could judge their new markets, but in the case of the Rolling Stones cards they were surprised when their testers told them that there would be very little sales interest. As a result the cards were never released for general sale. The only copies which survive would be those issued to the tester sites. Nigel (Nigel's Webspace Football Cards).