A football and hockey connection by way of Canada has now been found to the previously-posted-about Topps Hobby Card Album. "Found" is perhaps the wrong word; basically I just noticed this!

The 1960 Topps NFL Wrapper provides the first clue in this scan I nicked from Ebay: 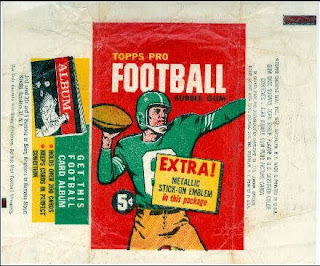 If you look at the detail, you can see that you needed 35 cents and five Bazooka or Blony wrappers to a Brooklyn address to obtain an album:

So this was a premium from a Topps retail product that required wrappers from another product for fulfillment. This also explains the Blony connection to the album. The other panel from the wrapper has both US manufacturing and Canadian distribution (via O-Pee-Chee) information, so Topps was distributing the 1960 NFL cards in Canada as well.

It gets interesting from here on out though as Topps also issued a CFL set in Canada in 1960 with a similar wrapper as compared to the US version : 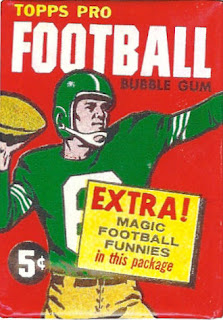 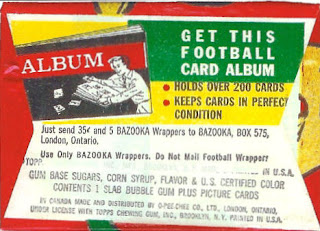 (Images taken from Collecting Canadian Football by Andy Malycky, well worth ordering -and quickly at that- if you are at all interested in CFL cards)

In Canada only Bazooka wrappers would work. as I believe Bozo brand bubblegum and not Blony was the second brand in Canada. Note the London, Ontario address for premium purposes.

Once football season ended, hockey fans could also get in on the fun: 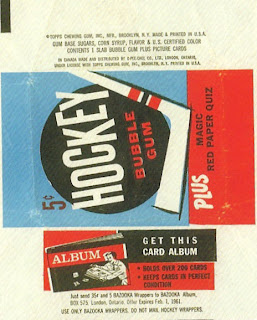 If you click the hockey wrapper you will see the cards were imported into Canada from the US (as was the custom at the time) and and the Ontario address is still indicated as the place where your Bazooka wrappers could be sent.

We have a 1960-61 time frame potentially for production of the album but Topps was sending them from a St. Paul, Minnesota address later on so the supply clearly exceeded demand for many years.

I will be on the prowl for more Hobby Card Album ads and post my findings here as appropriate. I also want to get a timeline going for Brooklyn, St. Paul and Westbury NY (70's) premium distribution addresses.
Posted by toppcat at 8:34 AM