Didn't think I would be able to post anything on tattoos again any time soon but a bunch of Ebay auctions featuring some very distressed 1960 OPC Football Tattoos has changed things. In addition to the 1960 Baseball Tattoos Topps/OPC issued a companion set featuring NFL players and logos of pro and college teams, together with the usual generic tattoos.

Logos and generic plays dominate but to what degree it is hard to say as a complete checklist of this set is elusive. At least 76 tattoos are known but only ten logos from the NFL have been identified, when 13 teams plied the gridiron that season so the checklists that are out there may be incomplete.

Forgive the rough scans but these show some OPC tattoos; Topps had their own set that would have been identical save for the small line of type identifying the manufacturer and country of origin: 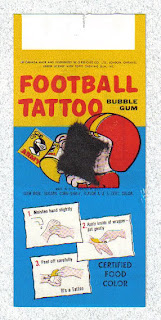 Fortunately a better scan exists of an unopened pack: 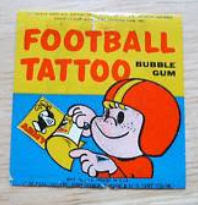 It looks like Elroy Jetson, no? Wonder if the cartoon stole the look? Here is a player tattoo: 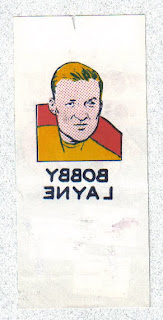 And wonder of wonders, a strip of four: 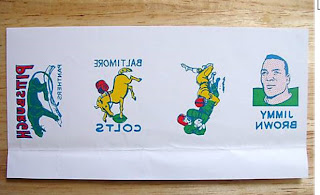 These are far harder to find that the Baseball version and any additions to the set count in the Beckett Football Guide are welcomed.
Posted by toppcat at 2:48 PM