The Venezuelan Professional Baseball League was formed in January 1946 and after a four team tournament crowned the Sabios del Vargas squad champions, a split schedule format was introduced in October of that year and a regular season was played through Christmas with the top teams advancing to a tournament round (or two sometimes) in the new year. The tournament winner would then yield Venezuela's Caribbean World Series representative.

The timing of the season allowed North and Central American ballplayers to participate and the split season ensured high quality ball was played throughout the winter. Fan interest was high in Venezuela and around 1959 (more on imprecise dating to follow) Topps issued a 198 card set that followed the first two series issued in the US. Topps printed 110 cards in the first series and 88 cards in the second,so the Venezuelan version was issued in series as well.

Here is a Harry Anderson card from Venezuela with a US counterpart: 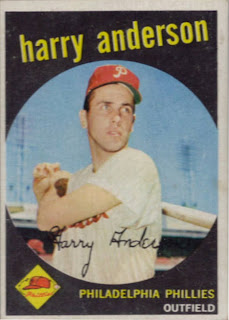 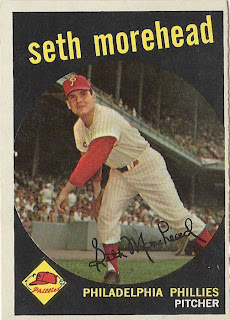 The 1959 Anderson image (as is the image below) is taken from the fabulous Topps Venezuela Yahoogroup moderated by Josh Alpert, a major collector of these babies. These are often found in quite grungy condition and are tough to find. It's hard to tell from the scans but the Topps cards have lots of gloss and richer colors; the Venezuelan cards not so much on either front. I'll not get into the vagaries of distribution and scarcity as there is a truckload of details on Josh's site (sign up required I believe) but it is worth noting a few things about the reverses.

The gray backs are compared to cream here, although they mimic the US grays: 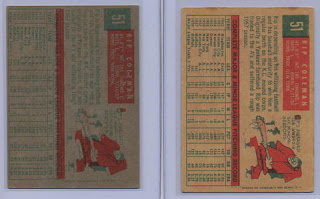 Two different countries of origin are referenced and some cards can be found with a PRINTED IN USA line while other states IMPRESO EN VENEZUELA POR BENCO C.A. Here is a closeup of the latter:

The team cards show no country of origin for some reason. It gets worse too; the team cards issued in Venezuala had numerical checklists on their backs and would take the set count past 198, which must have been confusing to the local kids.

Again, go to Josh's site for many, many more details.

1960 saw another Topps set converted for Venezuelan use, again with two series issued. Here is one now on the left (or top, depending upon your browser), vs. a vibrant US card on the right, or bottom if your screen is small. Compare the yellows in the names: 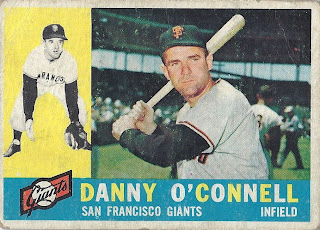 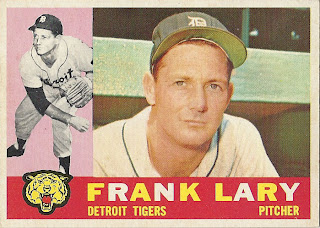 These are all mine now; I pickled up almost a full run at the National. The backs are duller than the US reverses, same order as before left to right, or top to bottom: 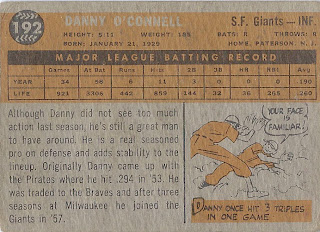 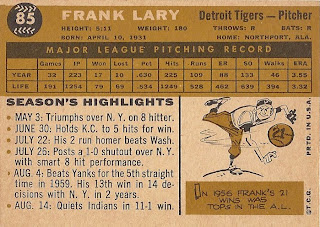 First series Venezuelan's from '60 are all gray backed while the US versions are all white. Second series cards are harder to ID and I'll not steal Josh's thunder but again direct you to his site. There is no Venezuelan production note this year but the Topps USA production is noted on some cards. Second series cards cards can look very, very similar to their US cousins. It's crazy I tell you! 1960's are easier to find when compared to the prior year.

We will get into the next batch of Venezuelan cards in a few days as the years resemble a kangaroo straight: 62-64-66. However, as noted dealer John Rumierz (my source for these cards) told me, the split season may have taken advantage of say, a 1960 style card being issued in the fall of 1959 or winter of 1960 so the issue date of some cards as identified by the front style is not a 100% certainty.

Trust me, it gets more confusing as we proceed!
Posted by toppcat at 7:03 PM