By The Power of Gray Stock

Following up on the hint of more Doeskin lore in my last post, lets take a peek at some scarce 1952 Topps baseball cards. No, I am not referring to the famous high numbers but rather 60 cards from the third series more commonly referred to as "Canadian" 52's.

Topps printed most of their 52's on gray cardboard stock but for some reason the third series, stretching from #131-190, was issued with white backs, which are much sharper than the gray backs to my eye. Here is a standard 1952 Bob Rush card: 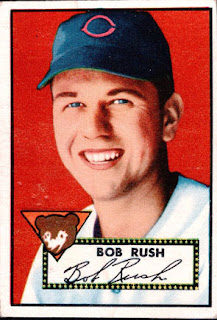 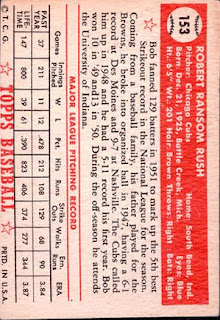 I suspect the scan (from Ebay) pumped up the white. These really tend more towards cream (note to self: check on white/cream controversy someday) but you get the idea. Most third series cards look like ol' Bob but a small run of gray backs exists and prevailing hobby wisdom attributes them to Canada. A splinter group of radicals, however, considers that they came with Doeskin tissues.

Here is a Bob rush in gray. Note how the front is also grayish and washed out, a common trait: 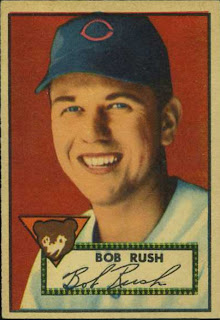 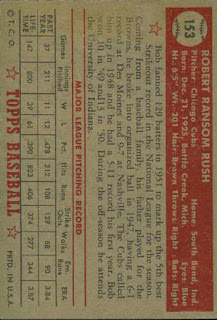 It almost looks like a standard gray back, just a bit muted. Here is a high number gray for comparison: 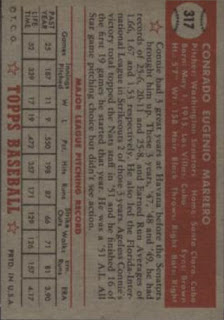 Noted collector Ted Zanidakis advises that the gray backs are never found with gum stains, which indicates alternate distribution and there is a thread over on Net54 that has some hints of a Doeskin connection. Some of the comments there are mine and I have already posted the gist of the rest of this post there (so it goes).

I highly doubt the third series gray backs came in Doeskin tissue packs; it's possible I guess but there is a lot of evidence against it, namely:

1) Doeskin was rebranding or relaunching around 1955 (the doe logo on the packs was trademarked Feb. '55) even though the Wings cards are from the 52/53 era. Wings and Rails & Sails are extant in unopened tissue packs with the doe logo trademarked in 1955, so the dating is solidly early 1955 or after. No known packs with 1952 baseball cards are known.

2) The Doeskin Wings and Rails & Sails cards were elongated to make a perfect fit inside a purse sized tissue pack. The 52 grays are regular sized cards.

3) Doeskin cards are just that. They have "Doeskin" on the reverse where "T.C.G." appeared on the originals. The '52 grays have the "T.C.G." indicia.

First series 52's went through at least three printings and flew off the shelves and second series cards must have sold like hotcakes as well. So why are the "normal" third series cards printed on a different stock? It could indicate the grays went through a short print run and due to quality control issues were discontinued, or that demand was so great that Topps attempted to find an alternate printer for overflow.

Are they Canadian? I really don't know but tend to think not. They could have been sold off like the 52 highs in Canadian packs issued in 1953 were but the theory only the third series was issued in Canada makes little sense. It remains a mystery.

And does anyone else think the Doeskin doe is a dead ringer for Rudolph the Red Nosed Reindeer? Or perhaps, more appropriately, Clarisse? 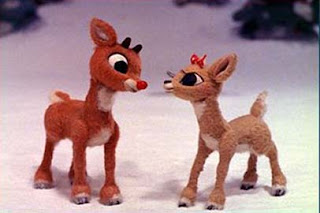 I do believe the Gray Backs were issued with a Doeskin tissue product. You state the significance of the baseball cards not being marked Doeskin like the other two issues. The other two Doeskin issues didn't have licensing issues to consider when reissuing pictures of trains, planes, and boats. Topps knew that they wouldn't be able to that to the baseball cards because of the contracts with each player.

I still don't think they were a Doeskin-not wide enough for one.