Well, a far flung dispatch from Wales has worked its way to the main research center here at the Topps Archives. Friend o'the Archive and frequent Wrapper contributor Bill Christensen has passed along a recollection from Mark Edmunds, who lived in South Wales as a plenty n gwrryw (hope I got that right), although a bit after the A&BC Rolling Stones cards discussed here last month were released, recalls:

"South Wales was used as a test area for lots of cards in the 1960's ...they weren't produced in Wales but some shops where I lived had boxes of A&BC stuff ...the big problem was that because of the tight money situation in Wales the shop might of had a box of say, CWN (Civil War News) , that would sell out but instead of another box of CWN they would replace it with say The Stones..." 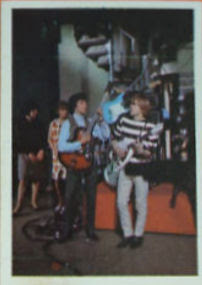 Apparently, even if you re-ordered a certain product, a different one might show up at the "test" shops. This is a slightly different method than used in the US, where a couple of local shops in Brooklyn and later Duryea were used to test cards dropped off by Topps employees.

More on test issues in the US, UK and elsewhere is coming as fall gives way to winter.

Email ThisBlogThis!Share to TwitterShare to FacebookShare to Pinterest
Labels: 1965 A and BC The Rolling Stones