The end in Venezuela for Topps began with a first, before a stuttering denouement played out almost a decade later. For the first (and last time) a third consecutive year of issue was accomplished in 1968.

The '68 Venezuelans picked up where the 1966's left off. A 370 card set, printed on cheap cardboard and with a companion album sold alongside was issued. Cards from the first press run of 109 in the US, with their more "pebbly" burlap mottling were mirrored in Venezuela (US card is on the right): 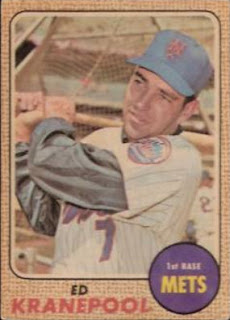 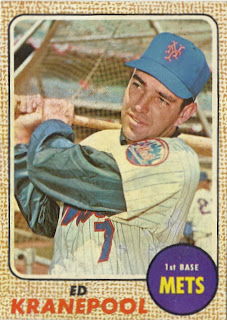 and you can see the usual lack of gloss and muted colors of the Venezuelan example quite easily, even if the scan (which I nicked from Ebay) is a little out of focus.

The more refined burlap of the next three US print runs would also follow in Venezuela, US card on the right: 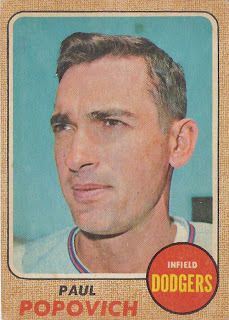 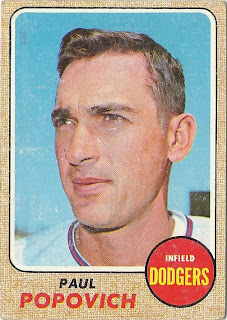 The backs are almost clones, although the gray cardboard on the Venezuelan card is a dead giveaway it's not a US issue: 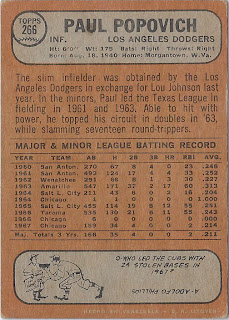 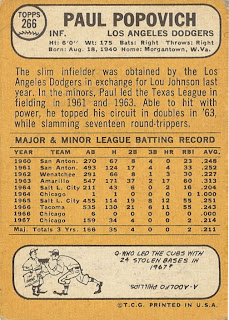 It's hard to pick up on the Venezuelan card but the copyright line reads "HECHO EN VENEZUELA – C.A. LITOVEN"

The 68's seem to be in shorter supply than the 67's but may just reflect what would have been a normal print run absent the exuberance of the prior year.

There were no Venezuelan cards issued in 1969 while 1970 saw a non-Topps effort from Ovenca that is not a bad issue, just not something I will get into here and will leave it instead to the Venezuelan Topps Yahoogroups afficianados instead.

Another year of nothingness in 1971 followed before a strange set of small stamps (or stickers, even though there was no gum on the backs) was issued in 1972.

Using the photos but not the design of the 1972 Topps cards, 242 thin "cards" were issued and designed to be pasted into an album. Check out Blue Moon Odom's Topps card, then the photo on the stamp (not to scale): 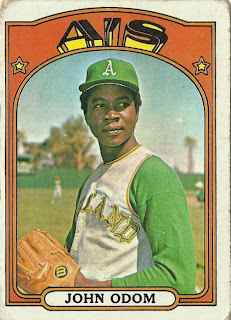 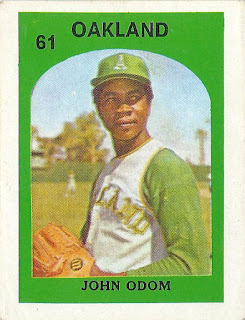 The back is snow white (c'mon, you can see this, right?): 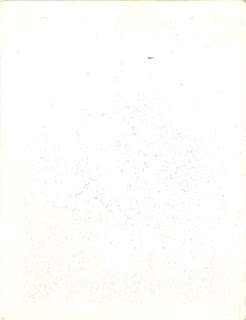 Whether or not Topps licensed their photos in 1972, there does not seem to have been any undue noise from them over their use so maybe it is a legitimate use of an official license.

Four more non-Topps issues would follow before some of 1977 US cards were shrunk down as part of a bizarre issue that featured 402 cards, 50 of which were taken from the US set and the balance produced locally with subjects from the VPBL. The latter highlighted local teams and uniforms using a design that bears a slight passing resemblance to the US issue (much like the VPBL cards of a decade earlier, although this set is not nearly as nice) and printed on white backed paper designed for pasting into albums.

Here is a front and back of the US subset: 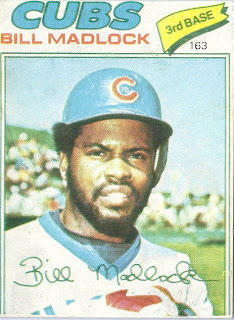 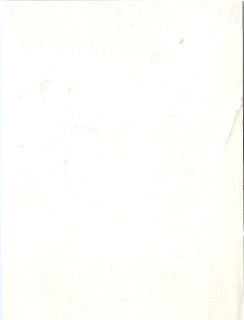 while the US card is here: 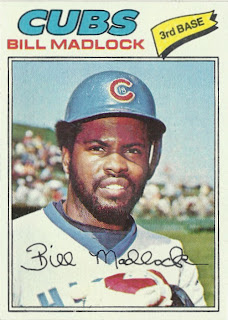 Here is the VPBL style "card": 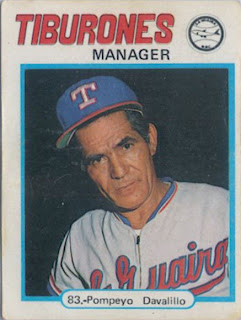 Again, much like 1967, these were 1/8" shorter in each dimension than a standard sized card. The 1977 US reissues are quite collectible here in the States, moreso it seems than many other efforts from Topps in Venezuela.

Any Topps involvement seems to have ceased following this issue. Why the Venezualan issues are so haphazard is something beyond me; I suspect it had a lot to do with the local economy and difficulties finding good printing facilities in Venezuela but who knows? My four posts (to date) are meant only as an overview and much, much more is available at Josh's Yahoogroup, linked here and peppered throughout these four posts.

In case you were wondering, the English translations of the titles for my four posts on the Topps Venezuelan cards are: