Back to Venezuela today folks as we take a look at the multi-faceted and intertwined sorta-Topps, sorta-not 1967 issue (or issues to be a tad more precise). For the first time since 1960, two consecutive years of cards were issued, although the '67 Venezuelan issue would not get to the Topps designed MLB cards until the end of the series. We'll get to it in the next installment but another set would be issued in '68 and the three year run would prove to be the last time consecutive Topps inspired cards were issued. In what must have been a very well thought out plan, the first 138 cards in 1967 were of players from Venezuelan Professional Baseball League (VPBL) teams. The design of the VPBL cards mimics that of the 1967 Topps issue, although the cards, like all the Venezuelan cards from this year, are 1/8" shorter in each dimension than their US counterparts. This led to razor thin borders on the cards, which looks a little strange: 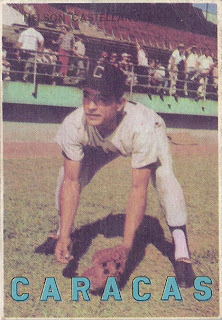 The photos used are quite nice, as you can see. The league consisted of teams from six cities: Caracas, Oriente, La Guaira, Valencia, Lara and Aragua, having expanded two seasons prior from an original count of four. Caracas was the defending Champion and would repeat in the 1967 tournament. While some MLB players are depicted in the VPBL series with their Venezuelan teams (Luis Aparicio being the most prominent) it primarily consists of local players who never reached the majors in the states and the flavor is decidedly local. I would think many of the stadiums in the backgrounds are not well represented with extant photos so the set provides a neat historical reference as well. The backs are where the fun begins. and the VPBL series runs from #1-138. The vast majority of the first series backs look like this: 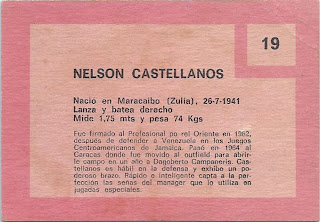 Spanish language backs have returned! I can only describe the color as somewhere between red and pink and it likely is imbued with just a tad more orange than Topps would use in the states. The cards must have been printed locally and while the fronts are Topps inspired, those backs are unique. As always though, there is a twist with these cards. Only 132 of the 138 cards can be found with the reddish backs. Six cards in the series (46, 60, 62, 95, 107, 123) are found with blue backs, which as we will see shortly were used for the US themed cards and the presumption is they had to be printed on another sheet.  (UPDATE: Dec. 20, 2021.This is somewhat incorrect, all six can be found with both colors on the reverse but there is indeed a twist!  See my Jan 1, 2022 post for more details on this and other aspects discussed below.)
In addition, three numbers (46, 60 and 115) can be found with two players (unsure if these were cards that depicted players who replaced those who had departed the league or changed teams or were merely a mistake) so there are 141 different players in this run, plus a pose variation of card #133. Why two of the doubled numbers are blue backed and the third is not just adds to the intrigue. Now, in a world where 132 card uncut sheets (or, technically speaking, half-sheets) were a Topps certainty for many a year, you would think that the 6 blue backed VPBL cards indicate that was the size of the uncut sheets but it may not be as simple as that since the next two series of cards are tied to runs of fifty. In addition the next run of cards, called the "Retirado" series, was a radical departure from previous Venezuelan sets not only in terms of sub-series size (fifty) but also design. Here, check it out: 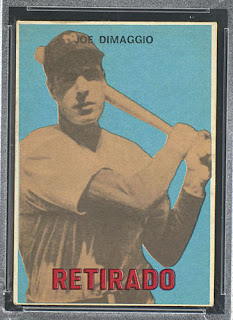 That vibrant blue color setting off the black and white photo was used on all fifty cards in the series. John Rumierz had a full set of these at the 2010 National and when seen together the blue is mesmerizing. You can see the cards are a little smaller than the US whens by the way Joe D. is swimming in his PSA holder, which uses a "card condom" to keep things in place. The vast majority of Retirado subjects are hall of famers and the sub set is quite pricey; you could buy a new car with the Bolivars it would require to piece all fifty of these together. I plan to take a much closer look at the Retirado set someday as the list of players who would eventually make the hall but would never have been thought of as immortals in 1967 is quite impressive. The backs of the Retirado series continue the style and numbering commencing at #139 but the back color is now a dark green: 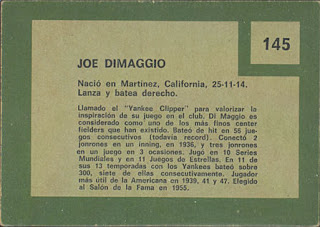 The above Joe D's sadly are not mine, they were lifted from Ebay, likely from John Rumierz's store. The DiMaggio card is an anomaly in that it is in nice shape. I have a Cy Young that is more typical of the average condition Retirado card, with a bit of a dirty front... 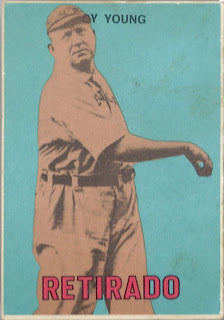 ...and reflecting the fact you could get an album for all three series in '67, resulting in massive back damage when removed (forgive the glare): 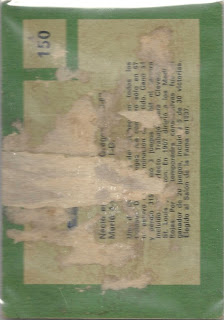 The Retirado's are the most difficult of the three subsets in 1967 while the VPBL cards are the easiest to obtain. Somewhere in the middle lies the traditional US reissue (with a US Foy alongside for comparison but not to scale): 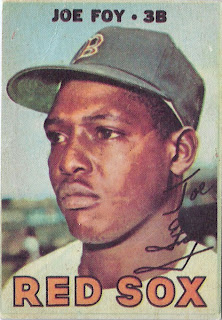 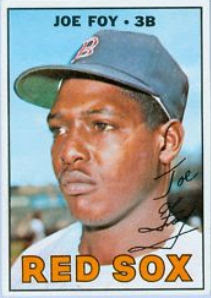 You can easily see the Venezuelan card has muted colors and smaller borders and the lack of gloss common to the Venezuelan cards is highlighted as well. For the first time since the run began in 1959, the reissued Venezuelan fronts did not mirror US print sheets but feature cards taken from a variety of series. I haven't checked but don't see any obvious '67 US high numbers in the Venezuelan cards but do see some higher series cards such as Tony Perez who is #476 in the US and therefore part of either the fifth or sixth press sheet in the US. As you might imagine, this allowed a better selection of players to be used in the 150 card series and many hall of famers lurk within. The backs continue the numbering and style but are in blue: 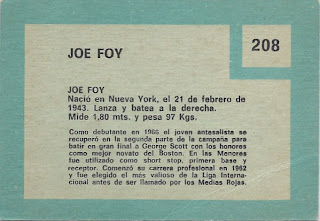 The backs can be oriented one way, like shown above, or the opposite when flipped over and the best guess is 100 of them are one way and fifty the other. I do not yet know if the 6 VPBL cards with blue backs have one orientation or the other. Additionally the color on the fifty "flipped" cards is slightly different being a darker shade of blue. Whether these were printed on 132 card sheets is unknown; I suspect not and think 110 or 121 card sheets are possible as the 132/50 discontinuity is bothering me somewhat, even with the thinner borders making any speculation about specific print arrays dubious. Prevailing wisdom over on the Topps Venezuelan site is these "flipped fifty" were part of the last run of cards printed. Here is a comparison of what happens when the card is flipped the same way over to the back for each type: a "left/light" of Gaylord Perry From the 'bay) on the left and a "right/dark" of Sam Ellis (from Josh's Yahoogroup) on the right. 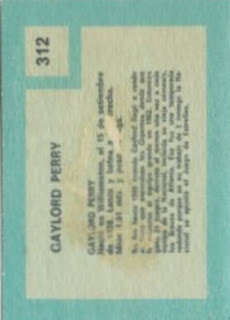 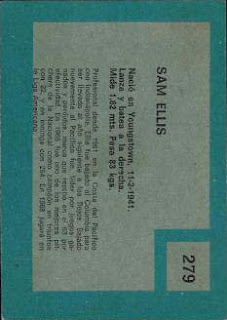 The fifty darker blue backed cards seem to be available in far lesser supply on Ebay right now, as in I can't even find one among a large group of auctions over there! Whether or not it's because the group being offered is from one collection bought intact from a specific area in Venezuela I can't say but it seems odd and suggests the dark blue backs are either harder to find or were sold separately from the light blue ones. All three susbets in '67 were sold at once but in identifiable packaging for each so the different coloration of the backs and consecutive numbering scheme was meant to unify them all. In my opinion this is the best of the Venezuelan issues by far and one of the landmark issues in the hobby, albeit one that is not widely collected. I plan to look at the entire 1967 Venezuelan set in much more detail fairly soon but will be back with the final Topps related cards from the Bolivarian Republic next time out.
Posted by toppcat at 7:31 AM

This is a question i posted on another board but havent gotten an answer yet, I hope i can get some help on here. Im not quite sure what this card is, if you look at the 1967 topps venezuelan set, willie mays is card number 273, however my card is number 213...... According to all checklists 213 is jim lonborg and mays is 273. After a lot of googling I found this site and it has a willie mays number 213 in the topps venezuelan set........ So im even more confused now, could it be an error??? I appreciate any insights you all can give me. Heres the card in question front and back

This is not popping up in the comments on the post for some reason so I will respond here.

I would think transposing a 1 and a 7 is pretty easy to do, so there could indeed be a variation for Mays/Lonborg. I am more of a generalist on these but know a guy with a lot of information on the Venezuelan issues and will run it by him.

Will let you know.

"The card is not an error, as all Mays cards are #213 on the card. Lonborg is also numbered 213. The connection to 273 comes though the album, as spot 273 was designated for Mays. The same situation exists for the very next card, Bunning & Mathews, who both are numbered 214. In the album, spot 214 is for Mathews, 274 for Bunning."