We travel today to a moment in 1955. The Brooklyn Dodgers are on their way to their only World Series Title, television rules the world and a tissue maker issues two sets that cause a lot of confusion to this day.

Doeskin Tissues were a new item in 1955, or at least were undergoing a rebranding. While the new logo was cute, there were sinister plans being effected that would ultimately ruin the company a few years later thanks to the manipulations of one Lowell Burrell. In between, they managed to co-opt parts of two Topps Non-Sports sets to help sell their small tissue packs.

Somehow, the marketing folks at Doeskin came up with the idea of issuing a card in each purse-sized pack of tissues. They ultimately settled upon using the 1952-53 Wings issue and 1955 Rails & Sails issue, both Topps products consisting of 200 cards per set. The cards came one to a pack like so:

Those scans are from PJD Enterprises, a totally rad site mostly devoted to 40's and 50's air and spacecraft cards.

Here is a (possibly) slightly different style pack, nicked from Ebay; the brown band may have been on the Wings pack as well but cutoff in that scan: 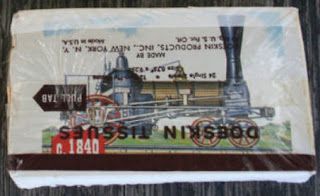 The Doeskin cards were larger than their Topps counterparts though and also had another difference I will get to momentarily.

Here are Topps and Doeskin Versions of the Wings and "Rails" cards. I cannot find any scans of Doeskins "Sails" cards right now, they seem far less common than the Rails for some reason. Topps is on top, Doeskin beneath: 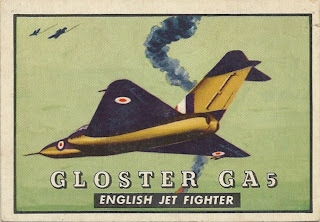 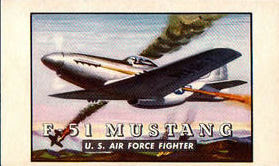 Those are not to scale but you can see the wide borders on the Doeksin card. The Topps card measures 2 5/8" x 3 3/4" while the Doeskin is 2 5/8" x a freakish 4 3/8" so it would fit snugly in the package instead of the usual cardboard stiffener.

The backs have the same border issue: 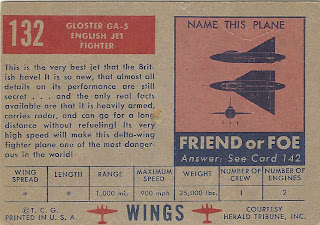 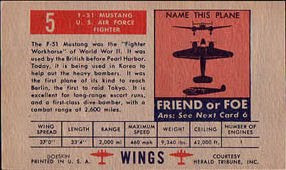 Again, the Doeskin Wings scans are from PJD Enterprises.

Interestingly the Topps "T.G.C." copyright has been replaced by a "Doeskin" notation. These are really third party cards printed by Topps. Allegedly only 100 of the Wings cards (from the first series) were used by Doeskin but as we will see with Rails & Sails momentarily, that may not be right.

Here are looks at the Sails (Topps only for now, dig the full bleed borders most likely due to the originals being paintings) and Rails (both types) , front and back, not to scale, same size differentials as the Wings cards and Topps first: 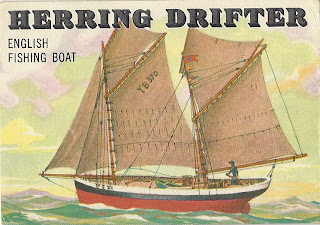 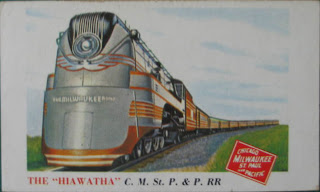 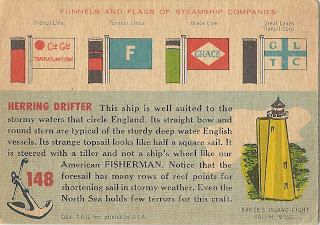 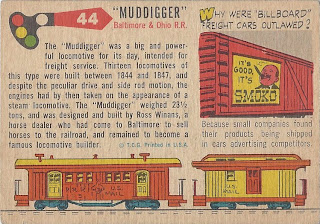 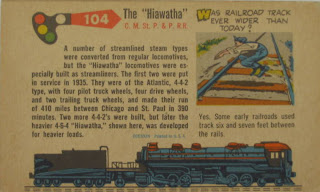 You can see the "T.C.G." notation (look above the small train in the center) becomes "Doeskin" on the tissue cards for Rails and presumably Sails. The guides all state only the second series cards from #101-200 were issued with Doeskin but the PSA Set Registry seems to contradict this. I believe the Topps set was issued in skip series fashion, much like 1954 Topps Baseball and cards from #81-130 and #151-200 look to have been issued together in one series. Elongating the cards makes me wonder how they were printed but that is an unsolvable mystery at the moment.

I suspect not all cards were issued with Doeskin but anything is possible and the PSA Registry is sparsely populated for the Doeskins set so I do not want to draw any concrete conclusions.

There is a potential but rather tenuous connection between some 1952 Topps Baseball Cards and Doeskin, which we'll get to next time out. Now, just take a gander at this: