When Topps first launched Bazooka Bubble Gum in 1947, it was billed as "The Atom Bubble Gum".  Putting aside the obvious inferences to nuclear annihilation, the idea being promoted was that it had powerful bubble blowing capability.  Along with this, Topps President Joseph Shorin was casting about for a mascot for Bazooka and the art firm of Solomon and Gelman came with Bazooka, the Atom Bubble Boy.

Gelman had caught Shorin's eye when he cleaned up a character used to advertise Popsicles and Bazooka the Atom Bubble Boy certainly takes cues from Popsicle Pete, the revamped mascot in question. Just like the Popsicle spots, Topps ran ads in comic books of the day, primarily in National Periodical Publications.  A while back some eBay auctions featured tear-sheets from these ads and I think this is one of the first ones, probably dating from mid to late 1948: 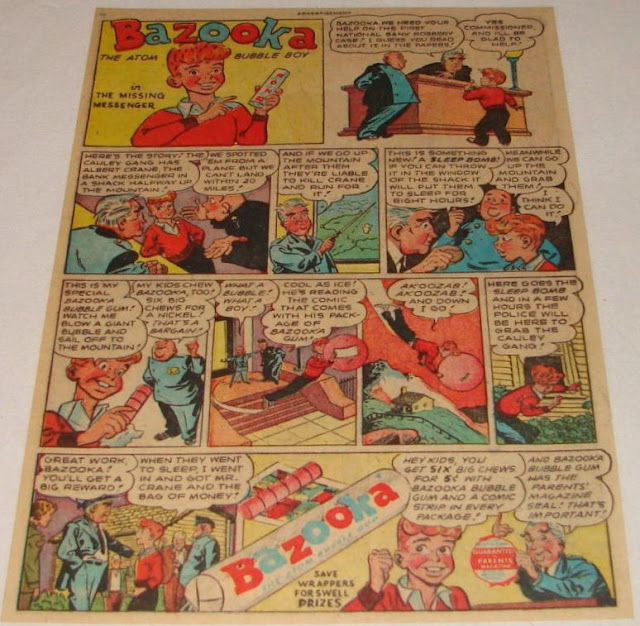 You can see how Pete uses his "atomic bubble" to float away and save the day! After chanting Bazooka backwards twice he is able to land-crazy!  Sorry about the angle, they all were auctioned using the same projection. While quite puerile by today's standards (and probably by the standards of 1948), this is the wholesome image Topps wanted to project.  Note the Parents Magazine seal of approval as well.

I'll be back with a few more of these here and there; the series ran for almost two years so there are a bunch of examples like this.
Posted by toppcat at 11:14 AM