Did you ever wonder as a kid what would happen if you wrote to Topps?  Well Friend o'the Archive Jeff Alcorn did and has the paperwork to prove it!

Imagine it's 1970 and you need a few cards to fill in your missing gray borders. There's no kids with extras to trade, no hobby store down the block, no newstand publication available to a kid like you. Topps, though, would funnel you to Woody Gelman's Card Collector's Company (CCC), where you could find just about any card you needed: 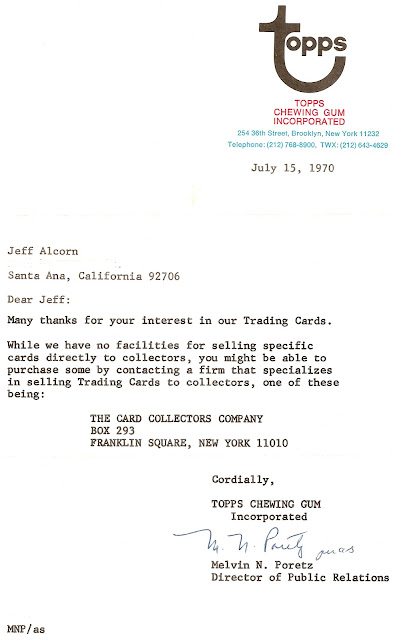 Fairly helpful actually. Now, imagine you have aged a decade and are an inquisitive collector.  You want to know who Topps has pictured as part of their Rookie All Star Team over the years and write to the one guy who would know it since he was the MC for the banquets where this award was handed out each year: 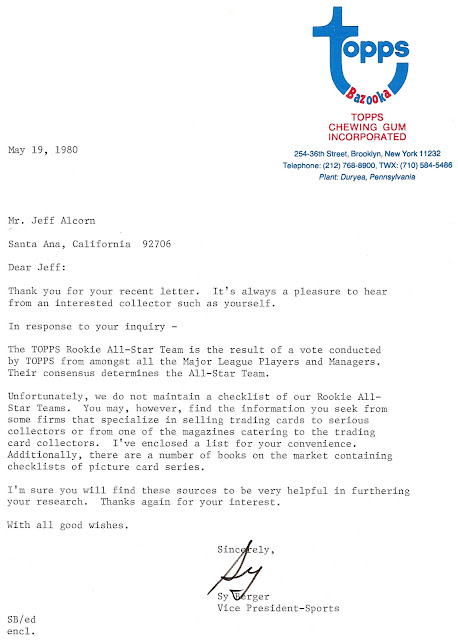 That's a pretty polished brushoff if I say so myself.  It's a pretty neat looking Topps/Bazooka logo too,no?  Woody's son Richard would have been running Card Collector's Company at this point as Woody had passed away in 1978 but it looks like he no longer had an exclusive deal. Alas, the attachment is lost but I'll bet Larry Fritsch Cards was on it by 1980.

From all the accounts I have heard, Topps had virtually no interest in their corporate history for their first fifty years of existence.  That would change in 1989 with the infamous Guernsey's auction.
Posted by toppcat at 7:36 PM

I think Jeff Alcorn made the mistake of sending his inquiry too far up the ladder (i.e., directly to Sy Berger), because I wrote to Topps for the same information on the All-Star Rookie Team program a few years earlier and got a response.

I requested and received a list of the ASR rookies from past years sometime during my years in college, the mid-to-late '70s. It arrived in the form of three xeroxed pages in disimilar formats, including the rosters of the first eight years or so handwritten on a sheet of notebook paper. Obviously, someone had made copies for me of whatever passed at the time for archival records on the program.

Back in the days before Topps had a web site on which to post press releases, the poor collector had no idea of what to make of those seasons for which Topps sometimes forgot to put the ASR trophy on some of the cards. The information I was able to get filled in that knowledge gap, not to mention cluing me in to Dick Hughes sharing the RHP spot with Tom Seaver in 1967, or the wrongful placing of a trophy on Ken Boswell's card in 1969.

About a decade later, I was working on a freelance piece on the ASR program for Baseball Hobby News, and wrote again to Topps for information. The letter was forwarded to Ken Liss, whose firm handled public relations for Topps, and he went to the trouble of digging up the information I needed. I must have inspired him, because I saw a lot of the same information turn up in a couple of ASR stories Liss did for the collector magazine that Topps produced about 20 years ago.

So, I'd agree with you that Topps could be kind of bare-bones in its own historical memory . . . but they also seemed to be generally nice folks who'd help a kid (or an adult) with information if they could.

What fun to come across this story and comment today, 4-1/2 years after it appeared. I'm the Ken Liss mentioned in the comment. It was actually my father's firm, Liss Public Relations, that handled PR for Topps for more than 30 years. I worked for him in the mid-70s after dropping out of college and again in the late 80s. (I'd earned a degree in communication in the meantime.) I was at the Guernsey's auction with my dad, who passed away in 1998. He would have been delighted to read the description of us as nice folks eager to help. That was him to a T. And I'm particularly delighted that someone remembers me going to the trouble of digging up the information they needed. I left PR a few years later and have been a research librarian for nearly 25 years (currently at Boston University). Digging up information that people need is a big part of what I do. It's great to hear that someone saw me that way that long ago.