Who Ya Callin' Bozo?

Around the time Topps introduced its new penny-sized Bazooka bubble gum tabs in 1949, they also started shipping a product known to millions but recognized by very few as one of their items. In October of that year bulk shipment of Bozo ball gum commenced. Sold in packs of 140,170 or 210 initially, by 1950 the line had stabilized at nine flavors (and colors) and was on the verge of national distribution, which was achieved just a couple of months later.  Early trade ads also make obvious a particular point; the gum does not seem to have been licensed from or named after Bozo the Clown:

Bozo was a huge part of Topps early success and shows the importance of their automatic vending division.  They just kept cranking out gumballs in the early days, without any need to really market the product except to the trade.  They also avoided having to pay for fancy packaging as Bozo ball gum was originally sold in those red penny vending machines we all remember from the supermarket or corner store: 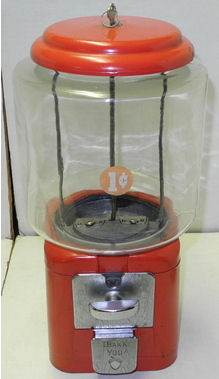 Later iterations would be sold at retail.  By 1974 you could buy a gumball for two cents over-the counter. 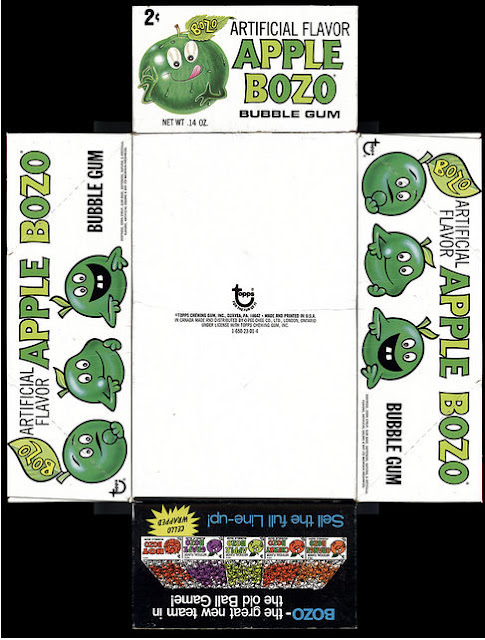 That little ad is interesting and I blew it up and reoriented it for a better look:

In addition to apple there was orange, cherry, grape and hot (is that a flavor?) There was a larger packaging configuration too and this is the one I recall, from 1975 or so :

That came in a box like this and went for a dime: 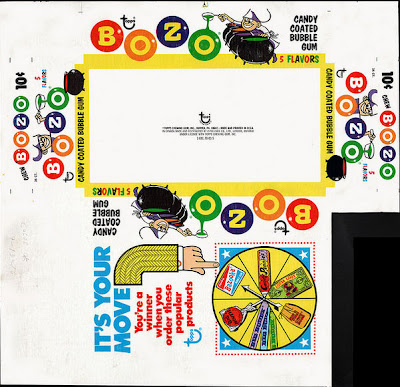 This gumball machine hails from Canada: 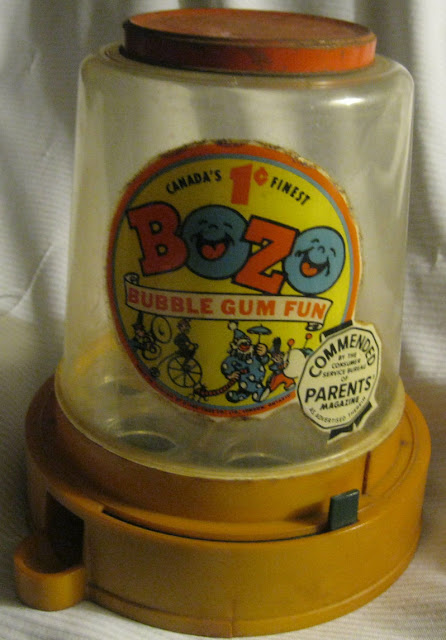 That Parents Magazine recommendation was also something that applied to Bazooka in a campaign coordinated by Topps around 1949, so that's an early machine. I believe Bozo is still an active brand in Canada but don't think it is owned by Topps anymore.  I suspect they sold the line off around 1998 or so and intend to do some more research to find out.


A number of scans above were provided courtesy of www.collectingcandy.com - go give Jason some love!
Posted by toppcat at 12:42 PM