Well I must admit I thought I had exhaustively covered the whole 1975 Bazooka Bubble Blowing Championship here on these digital pages a while back. I cam close but it turns out there is a tiny little bit more to tell.

Friend o'the Archive Jeff Shepherd, while traversing the roadside attractions of Ulster County, New York recently, came across a most curious artifact hanging on the walls of Hickory BBQ in Kingston: 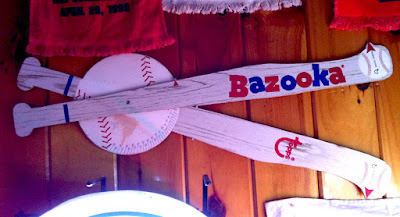 Now I don't know if this was some serendipitous aligning of the stars or just a random event but the bubble gum king finding the king of bubble gum calipers on the walls of a bbq joint in a town best known for being a way station when heading back downstate from Cooperstown is one righteous happening!  I will let Shep relate the story:

"Got to talking to the owner - he had a friend who worked for Topps in the late 80's....used to go to Brooklyn and visit him at work, grab some free swag etc.  On one occasion Topps was moving it's headquarters from Bush Terminal to Manhattan and his buddy told him to grab anything that was in the closet of his office.  So he's piling up unopened boxes of cards (all 80's garbage), and discovers the bubble meter.  The friend at Topps wasn't going to let it go, but the BBQ guy jokingly said he did say anything in the closet."


Unlike the (rare) thick cardboard example owned by our good buddy Shep, this one is made of wood, about 30 inches in length and good quarter-inch thick.  It looks like the logos were painted yesterday, doesn't it?  Here is a close up look at the caliper wheel: 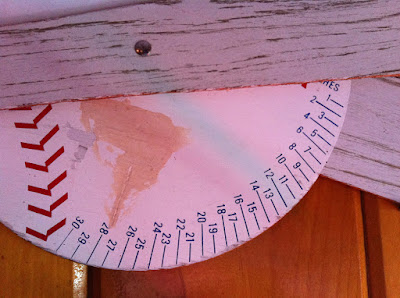 Shep surmises that the cardboard versions were used for the local, elimination challenges held at the various major league facilities while the wooden one was made especially for the grand finale, where Kurt Bevacqua defeated Johnny Oates in an epic battle of bubble blowing proficiency.  I can't see anything wrong with that take.


This reminds me I have not had bbq in a little while.....mmmmmmm!
Posted by toppcat at 7:47 PM

What a great find!

Just another great reason to grab some BBQ!