A very interesting bit of Topps history has popped up at Huggins & Scott this past week.  Our most intrepid readers may recall a major Pennsylvania find about a dozen years ago of the 1968 Topps Baseball Plaks test issue being covered here. You can click through for the full story but a former Topps employee in Scranton had saved a bunch of the Plaks (it seems employees could take home failed test products!) and would occasionally hand some out to the neighborhood kids.  Interest in little plastic busts of baseball players remained low however and she literally shelved the Plaks for the next forty years as they resided in a bucket in her garage. There were some intact sprues of three subjects still and some singles but who knows how many she hand handed out forty years prior?

Mile High's Brian Drent ended up with the consignment and began selling them in 2009. The find revealed 19 of the 24 players depicted on the stunningly nice cardboard checklists plus a Mantle variant ("big nose"). A lone Willie Mays Plak was found elsewhere and the set checklist remains I believe at 20, with four players still unaccounted for:

A minimum of four of each subjects (save Mays, with none) were in the original find and some players appeared on three different sprues, fueling thoughts the missing four were just subbed out with duplicates.  I would caution against that scenario being accepted at face value as it's unknown how many Plaks were handed out by the former Topps employee. Here is an example of an intact sprue with the Mays no less, courtesy of Larry Serota: 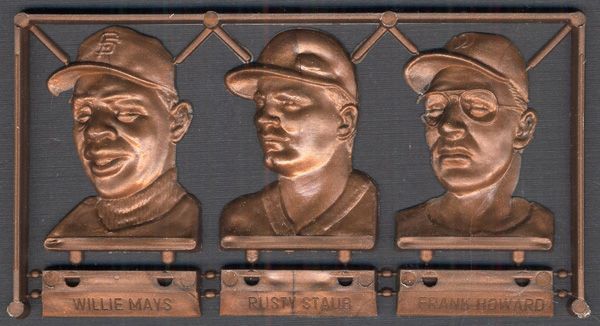 The Plaks and even the little connecting pegs and blobs are actually quite sturdy, surprisingly so as I found out when I ended up with a "Tom" Davis bust from the find. Prices were depressed a little after the find (it was extremely hard to find examples prior) but the sell through was not completed IIRC. These remain scarce, still with limited appeal I'd say although the colorful photo checklists are popular with HOF collectors and around in a little bit more quantity with 67 showing in the present PSA pop report.

Now we have another Pennsylvania find (or maybe something held back from 2008)-uncut strips of the checklists!  Check these bad boys out, eleven in a row for each league!

I don't know if these were reference copies, proofs or what but the rows seem to be complete at 11 across.  I had through the checklists were originally cut vertically before the final cut but that may not be the case. Either way, this is a crazy and wonderful find!