Not So Simply Super

I don't know about you guys but I've spent some quarantine time ciphering out various Topps puzzles.  The biggest one so far (literally and figuratively) has been 1970 Super Baseball.  I'll spare you most of the number crunching and give you what's known and what's not.  I've been corresponding quite felicitously as well on this matter with Friend o'the Archive and uncut sheet super sleuth John Moran.  I'll get back to Mr. Moran after presenting some colorful scans, graphics and (B&W) numbers:

My interest was piqued by a partial (and torn) uncut sheet featured recently by Huggins & Scott: 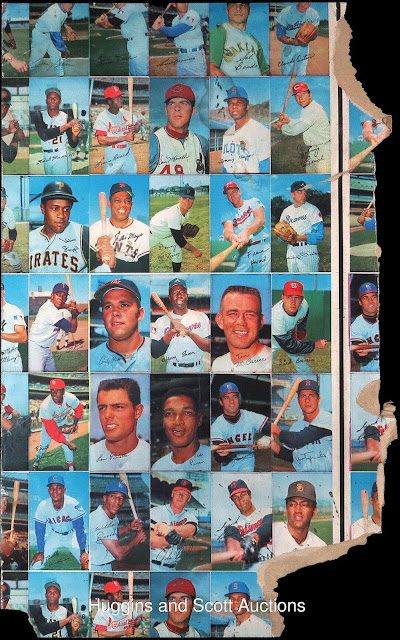 I'm sure there's a great story behind this and it looks a right mess but very importantly it includes the gutter separating the two half sheets that make up the full press sheet.  Each sheet side, actually called a slit, has 63 cards: Slit A on the left and Slit B on the right. I call this sheet "HS1" 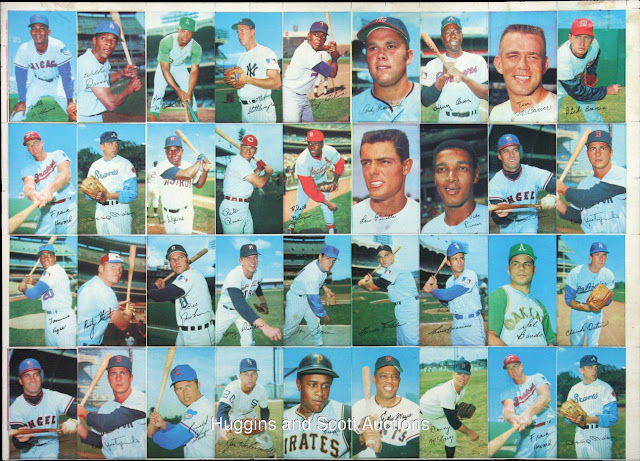 REA had an uncut sheet sheet as well once: I dub thee "REA", although I note I can't find the sheet over in their archive right now after going back to grab their site link.  Still, that's the name for our purposes! I believe it says SLIT B on the right edge between Bosman and Yaz, which was also helpful.

And then this one I found from a long forgotten source some time back, call it "PROOF": 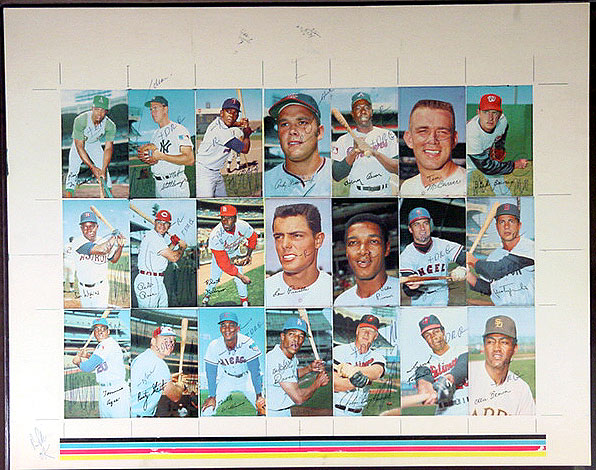 However the problem with proof sheets is they show a specific area of sheet real estate but not necessarily where on the sheet the proofs ended up residing. So I began anew with HS1 and then turned to the others.  I came up with a schematic which I show here in two parts-here's slit A: 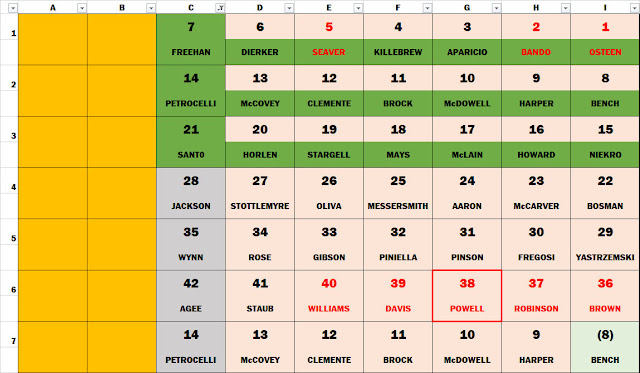 Those two left columns will be our focus momentarily.  But now Slit B, for which I use columns labeled AA through II just to make things harder (not really): 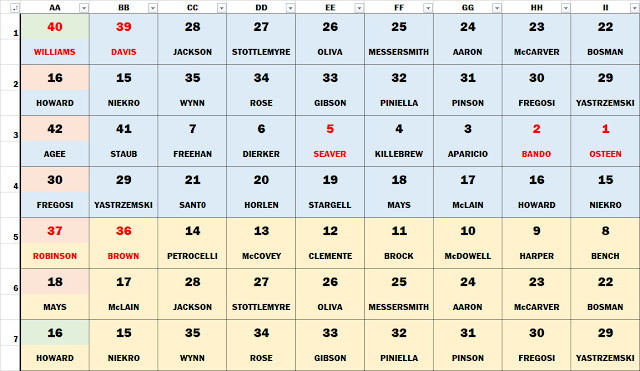 As for the colors, which you see show interlocking segments of the from the scans I inserted above (and also how the torn sheet bridges the gutter), here is the legend: 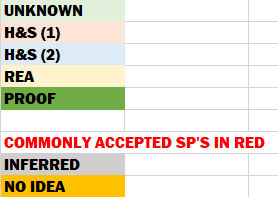 The Bench in I7 is technically "Unknown" but a safe bet so I've treated it as part of the confirmed array.  The four "Inferred" cards in gray follow sequencing that also seems right so they too are treated as being in the array.

I then added up all the impressions for each subject and got this:

The results, pending the 14 "No Idea" slots for the A&B columns give us some reference points to fill in same:

Except for Powell, all the known SP's appear twice so far across the two sheets, again noting we are missing 14 impressions.

Everybody else has three impressions across the 112 presently known positions. And note the way those pairs stick together numerically in the count and also on the B Slit in Columns AA and BB.

Now let's get back to Mr. Moran.  We both feel the A and B columns will be locked in as pairs, although you will see in a second (and from the B Slit schematic above) that Powell may not fit this pattern. I have a theory that the eight known SP's appear no more than twice across both sheets while John thinks some may appear three times and have production related shortfalls.  We do agree on the following three potential pairings though...

That would bring Clemente, Gibson, McCovey and Rose to four impressions, Mays to 4 and Stargell to 3 but that's an uneven pairing and may not fit. Possibly McLain & Mays could be paired, making each a "quad."

The Clemente is on the top edge for sure (we also know on the bottom) as this cinches it and a McCovey appears to be as well in some scans from Mr. Moran. Check out all the real estate above Roberto's image in this scan: 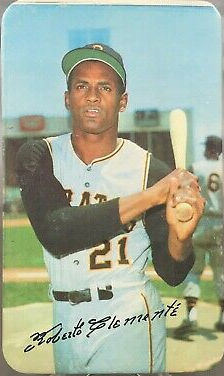 McCovey is similar up top, just not as much white on this example compared to the Clemente: 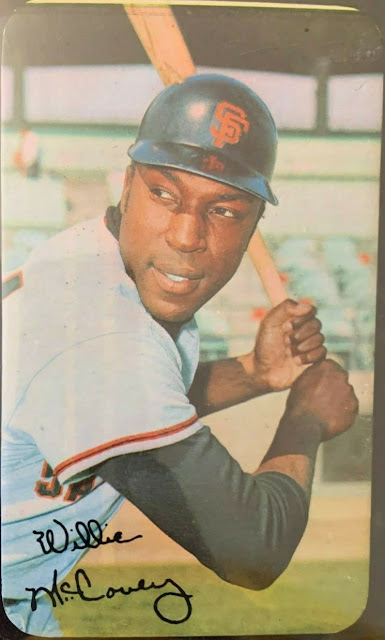 Here now is where our theories diverge. Here's my take:

My "final four" theory preserves my "SP twice only" thoughts while John's is more based upon PSA pop reports. Mine brings Aparicio, Dierker, Freehan, Horlen, Killebrew and Santo up to three impressions each.  His brings Killbrew & Seaver to 3 and unbalances Powell (2) and Robinson (3). My Powell-Agee pairing is bothering me though.  It could be "Powell-Robinson, or Agee-Staub...or no second Powell at all; he is definitely the spanner in the works. The B Slit has pairings of 40-39 and 37-36, neatly leaving #38 Boog outside the operating pairs sequence.

OK, I have clearly been driven mad by lack of human contact!  Anyway, the thought was to let the readers have a go at it and see if anything pops up.