Damn Yankees started life as a 1954 novel by the appropriately-named Douglass Wallop titled The Year The Yankees Lost The Pennant and centered around a phenom named Joe Hardy, who has made a Faustian bargain with one Mr. Applegate to help his beloved Senators win the AL pennant. 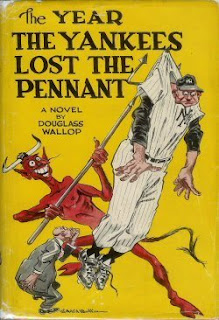 That is a Willard Mullin cover friends, which is always a treat. The book was turned into a successful Broadway musical starring Gwen Verdon the following year and then became a movie in 1958, starring Verdon and Tab Hunter. The movie is a pretty hokey affair but the poster is eye-catching: 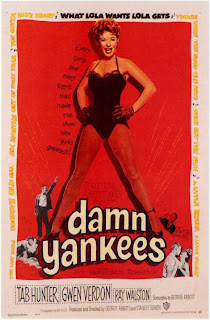 You have probably heard "Whatever Lola Wants", the most famous song from the show, a few times.

Now you are probably wondering at this point what this has to do with anything concerning the Archive. Well the show was revived in 1994, did middling business and was shut about sixteen months later. It starred Bebe Neuwirth and featured as a consultant 106 year old (!) George Abbott, who had produced the original show in 1958. Still wondering? OK- a 20 card set of souvenir cards was produced by Topps and sold in the lobby gift shop in this foil pack: 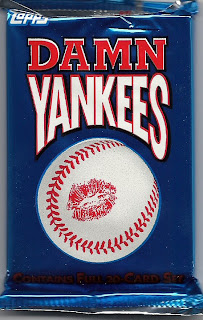 Jerry Lewis joined the cast after the show had started its run and a separate card was issued of him in 1995. He serves to illustrate what the set looks like as well: 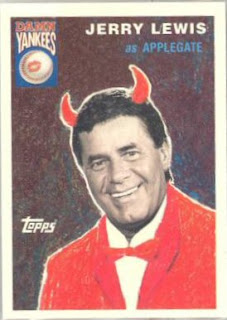 The set and Lewis card pop up on Ebay with some regularity and can be had for, dare I say it, a song. I don't want to open mine, so I'll track down a few scans and post 'em in a catch up thread, which is long overdue.
Posted by toppcat at 10:46 AM

Very cool! Another thing to add to my ebay wish list.

I have a 1995 Topps Jerry Lewis Damn Yankees #21 but mine is signed in silver and on the back has 1/1! It was sent to me by Jerry Lewis for helping with a problem a few months ago. I saved the envelope and letter of course.

My question is have you ever seen one with a silver signature becuase this looks like it was embrossed on the card not signed by him directly but I could be wrong? Was there any random autographed cards that you know of in those packs?

I have also NEVER seen one on Ebay or anywhere else and no one I talked to even at Topps can remember this card.

Also on the back it has 1995 and your story or whomever wrote this mentions it as 1994. It is also the Damn Yankees and him with the devil ears as pictured. Thanks,
Dave
dsm4857@aol.com

The Lewis Card is 1995 vintage, the rest of the set is 1994. I am not aware of any premium or signature cards associated with the set but it would not surprise me if a few were produced. Mr. Lewis may also have received some cards to use with his charity work so that might explain your "embossed" signature but the 1/1 makes it seem like a chase card. Strange!

I can do a scan if that helps anyone. Also it seems strange too that if others did exist with the signature in the 14 years since the card was issued that none has shown up anywhere especially Ebay.

I remember several years ago I think Upper Deck gave it's employees a special issue Santa Card I think it was and some appeared on Ebay within days of them getting the card.

This is awesome. Thanks Dave