Today will be the day you read more about unnumbered 1957 Topps Baseball Checklists than you ever thought possible.

As we know, Topps issued some unnumbered checklists with their 1956 baseball and football cards. They started seeding in contest cards as well in the football packs and then in '57, amid shrinking their cards to standard size, there was a riotous frenzy of checklists, contests and premium cards added to the packs. I'll address the contest cards in my next post as this one is going to be long enough but you can see the premium card insert here.

Still actively promoting Blony, the gum brand that came to Topps with the Bowman purchase in February of 1956, the '57 baseball checklists had ads for that brand and Bazooka as well. I have to think Blony was a still big seller for Topps, likely in the Philadelphia area, since they were going into warp drive promoting Bazooka otherwise.

First we will look at the fronts. As you can see below, there were four checklists issued covering five series in total: 1/2, 2/3, 3/4, 4/5. Each checklist covered two consecutive series as Topps continued to work in previews of what was coming next, a meme that would grow and grow in the future. 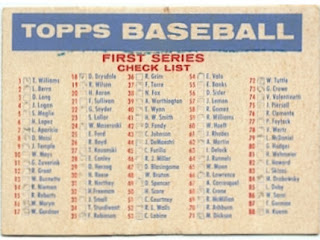 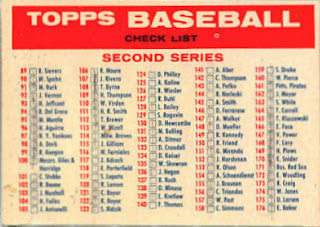 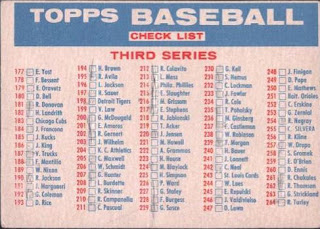 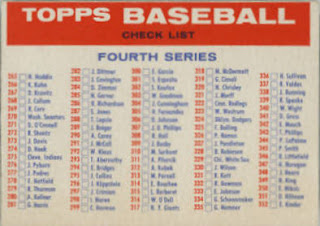 You can see the blue/red/blue/red alternating header block pattern which appears to be consistent all year long but there are also three different style fronts; only the second and fourth series obverses look close to the same and even there they swap secondary colors. By the way, all the scans in this post are either culled from Ebay, Mike Wheat Cards or 707 Sportscards.

Those first two up top have wavy or off cuts which leads me to believe the checklists were cut at high speed from vertical strips. 1957 uncut sheets have been seen and while they are the first to be made up of two 132 card half sheets - a sacrosanct array for Topps stretching across four decades) - none have been seen with checklists on them so once again these cards were pushed into the nickel wax and whatever cello packs were sold that year.

The reverses carry either Bazooka or Blony ads. Here we go with Bazooka first: 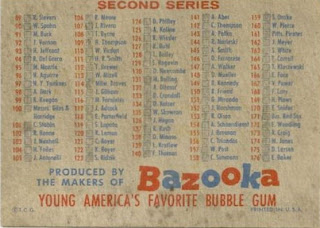 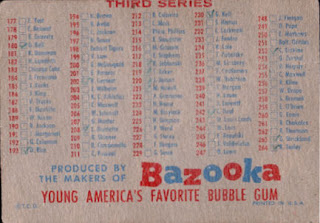 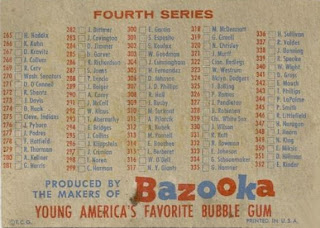 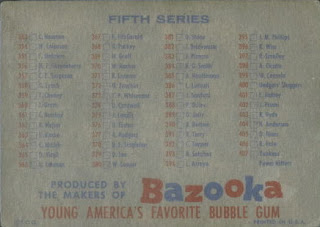 While the ads don't change, the cardboard stock seems to, although it's always hard to tell from scans. The final Fifth Series header is also in Blue, matching the color on the front designating the Fourth Series while the prior three were Red, also matching their front Series designator. There seems to be no difference between Bazooka and Blony fronts but there is some variation with the Blony backs and if you look at all of the 2/3 fronts and backs together, that series does seem to have been printed on white stock whereas the others are gray: 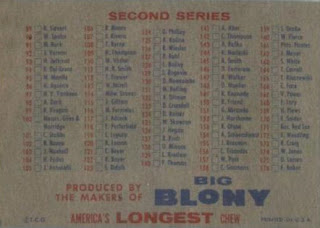 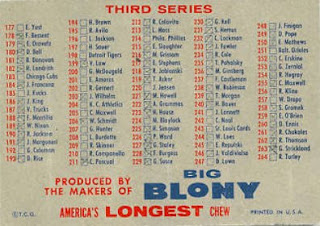 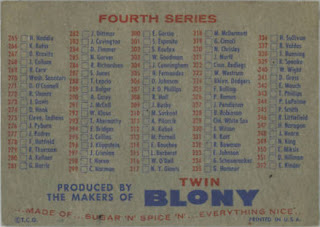 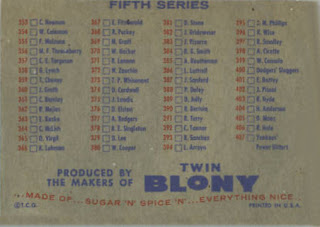 Even the "Twin" goes to blue for the last series! The 4/5 checklists seems to be appreciably harder to finds than those from the earlier series. I can only speculate as to how they were seeded into the packs but the 4/5's could have coincided with the scarcer semi high number (4th series) cards in '57. Notice how Big Blony appears on the first two and Twin Blony on the final two. I wonder how the rough and tumble boys of 1957 liked the "made of...sugar 'n' spice 'n' ...everything nice" line?!

In case you are into symbolic gestures, note how the 1957 set matches the 1952 with 407 subjects, and includes team cards once again but also two multi-player cards of the Yankees and Dodgers (almost a first if you discount the 1954 O'Brien twins card) plus a combo of the league presidents, a sure fire bicycle spoke candidate. The first four series in '57 have 88 cards, which means each would have been printed three times over two 132 card sheets and a final series of 55, a number which seems to lead to short prints in the Topps universe (along with 77). I'll post a 1957 Topps Baseball set overview someday that delves into this more deeply.

For some reason the 1956 checklists seem to be in greater supply than the 57's. I find this odd as the normal Topps trendline is increasing production for each successive year but maybe more 56's were simply printed. The price guides seem to price the 3/4 checklist at about double the level of the previous two but supply of all three seems pretty similar. As noted above, the 4/5 checklist is the toughest by far.

Hang tight-a look at the 1957 contest cards will be coming up right quick! Meanwhile, we'll see if any of our eagle-eyed readers can find some further checklist variations.
Posted by toppcat at 9:27 AM