Following up on last episode's look at 1957 baseball checklists, we have received some scans from Firiend o'the Archive Doug Goodman that confirms the theory the checklists were printed separately from the regular issue cards and likely cut in strips. Here is the front of a 2/3 Series checklist, with some red title block showing on the bottom: 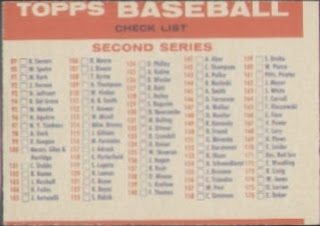 The back shows a similar story: 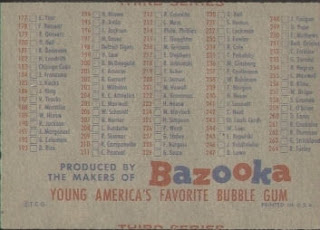 A checklist and corresponding contest card (which are about to be blogged upon in our next installment and which consist of four distinct dated guess-the-score contests) could have been printed together and inserted into the packs series-by-series.

1957 would be the last year of these bland checklists as a new paradigm was unveiled in '58. Have no fear though, we still have to take a look at what was in the football packs in '57 too!
Posted by toppcat at 7:27 PM