After issuing a couple of unnumbered checklists in 1956 baseball packs, Topps took the idea to the gridiron and issued a single checklist card that year, also "pushed" into the packs: 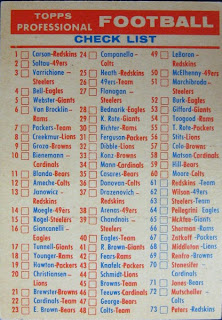 I had to grab that from Ebay as I have not yet waded into the 50's inserts personally.

With only 120 players in the set, there was no need for a second checklist. However, the flip flop of the colors from the first group of 60 to the last indicates to me two series were issued. This Ebay nab shows the reverse and a Bazooka ad: 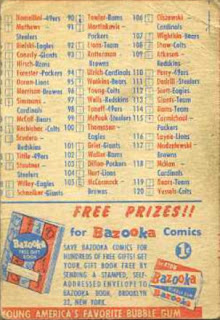 Unlike the baseball checklists from '56, Blony Gum does not seem to have made the cut for football, although Topps would continue to market the historic brand aggressively for a few more years.

120 cards is an interesting figure as well as the cards would have been printed on 110 card half sheets (two of which comprise 220 card full sheets; half sheets are what almost all extant uncut sheets actually are) as seen in the '56 baseball checklists post. This gives 11 rows and 10 columns, or vice-versa depending upon your perspective, on a half sheet and it appears there are 20 short prints in the '56 football set, so we have a number divisible by 10.

I've never seen a full '56 FB sheet but if you take each 110 card half sheet and print 100 cards in the same quantity on each and then a different group of ten each in one column on each half sheet you can get to 120 different cards with 20 short prints very easily. This will be a discussion for another day as there is also some thought certain teams were short printed in their entirety and wouldn't you know it, there were twelve teams that year and at ten cards each you get 120!

Topps used the 1956 football set to start a trend that would continue into 1957, the contest card. Five or six different ones were issued, covering two separate dates (you had to predict scores of various games and mail in your response). Here is one that covers two games played on October 14th: 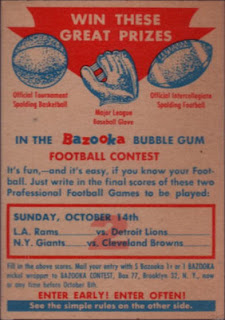 And here, in a scan I borrowed from a great online store called Quality Cards, is an example of the November 25th card: 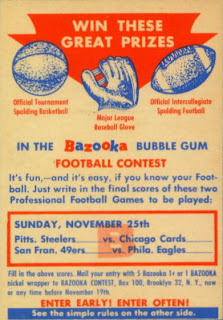 Each date has (maybe) three different possibilities as different games were featured . I say maybe as the reverse shows these were actually numbered (or lettered) in a sequence as such, as revealed by Beckett:

C1, C2, or C3 for the three types of October 14th games (C must be for "Contest") and CA and CB for the November 25th games. There is a question as to the existence of the third type of November 25th card and since I can't find any good back scans of these at all, I'll leave that for another post as well. You can see the number or letter superimposed int he center of each card.

The contest cards appear to have been printed along with the checklist as this helpful miscut details: 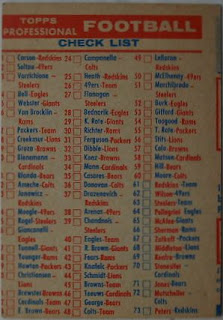 The contest cards and checklist are tough and the checklist is difficult in nice, unchecked condition, much more so than one of the baseball versions. Miscut and off-centered checklists are frequently seen.

My feeling is that the contest cards were a way for Topps to see if their distribution network was working efficiently. After all, they now had tons of addresses from around the country and could see where their cards had been sold and it appears Topps tried to get a team from both coasts and middle of the country on each card, which would make a lot of sense for a nationally distributed product. 1956 was also the first year of the NFL's national TV contract, so the stars were aligned for Topps!
Posted by toppcat at 7:14 PM

In the '56 Football set it has been a long running theory the the Redskins and Cardinals are short prints.

Beckett 25 mentions Colts, Bears and Browns as possible short prints but I too have heard of the Redskins and Cardinals being short sheeted.