OK, I'm a month early but seeing all the Valentine's Day candy has inspired me to show all you folks out there in TV land a tough to identify variation. 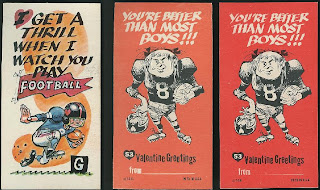 The middle picture shows a lighter red back than the rightmost example and as it turns out it was of a 1961 vintage, while the redder version is a 1966 reissue. 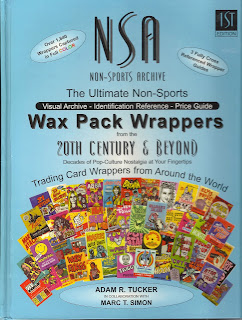 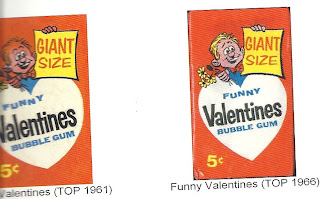 The only real difference is the kid on the 1961 pack has red hair and the '66 shows a blond. The '61 pack is near the spine of the book, sorry for that. There is some other evidence of the 1966 reissue as well here, just scroll down a little and you will see a production code for it. So a set long thought to be from 1961 is also from the future as well!
Posted by toppcat at 8:02 PM