Friend o' the Archive John Moran was kind enough to send along a Red Sox wrapper from the 1967 Sticker issue recently discussed here. Where the Pirates wrapper showed a pretty good likeness of Bill Mazeroski, the Red Sox pack displayed an unmistakable Carl Yastrzemski who was playing the last Triple Crown season MLB has seen. 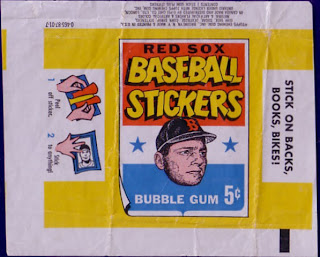 It's got a bit of a tilt to it, doesn't it? I really like the poetic license taken with Maz and Yaz for the two wrappers!

While we are on a Yastrzemski kick, does anyone out there know what this came from? I don't think it matches any known Topps images but I'm horrible at looking at raw photos and projecting what they looked like when actually used on a card. This appears to e an engraving: 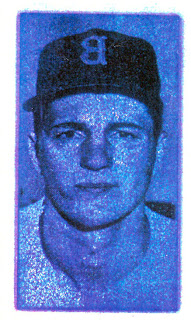 The back has Don Schwall scrawled on it but I think it looks like Yaz. So did the guy who sent the scans to me years ago (forgot your name buddy, sorry). 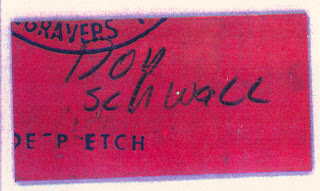 Don Schwall looked like this when he was on the Bosox: 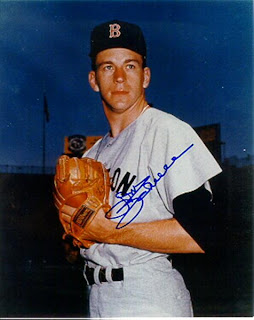 I don't think that's our man. By the way, Don Schwall was one heck of an athlete, was the 1961 AL Rookie of the Year and won the first game in Atlanta Braves history. Click on the link, you'll see!

So is the "Yaz" a red herring? I don't think he is but if you know what the engraving is, drop the Archive a line.
Posted by toppcat at 6:50 PM

Dave-
I have had several similar engravings before of a variety of subjects. They are magazine engravings for printing photos (or so I've been told when I purchased them from many different dealers, and I have no reason to doubt this). I believe these were used with almost any magazine from the1940s through the 1970s. All of the ones I have owned (Mel Ott, entire high school football team, etc.) have had similar markings on the back. David R (Cycleback) on Net54 probably can tell you a lot more about the engraving than I can, but I figured I would let you know my own thoughts.
Yours in collecting,
Alan Elefson

Alan-Thanks for an illuminating comment. Looks like we can take the Yaz engraving off the "could it be?" pile.