No, this is not a hockey post! Today we turn our eyes to the sometimes Frozen North and start looking at an eight year run of Canadian Football League cards produced by Topps. It comes as a surprise to many folks that Topps produced CFL cards but starting in 1958, when the league was founded in a forging of powerful east and west factions that were themselves outgrowths of an even older Rugby league, they were there all the while to document the players.

Now, you may have your opinions about how 110 yard fields and 3 downs make it a different game (among other things) and I certainly have mine but CFL ball is pretty close to the brand played in the NFL and the CFL cards, at least initially, were also pretty close in appearance to their NFL counterparts.

The first set in 1958 numbered 88 cards and featured the 9 teams in the CFL sans the Montreal Alouettes. They are dead ringers for the US issued 58's but these were printed in Canada by O-Pee-Chee: 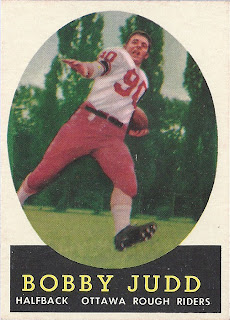 Since the CFL season starts about three months prior to the NFL's, the decision to make the cards look the same on both sides of the border must have been made in the winter of 1958. White background cards in each set have black information blocks while cards with different colors don't have this distinctive two-tone look. You can also see how the oval player photo led to the design of 1959 Topps baseball cards with their circular photo.

Disregarding all the French, the backs are similar to but not 100% identical with the NFL cards; they are cut from the same cloth so to speak: 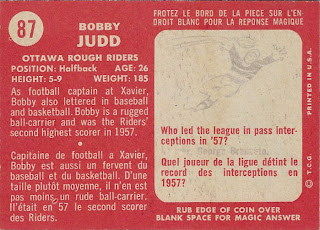 I am going to run a series of posts on both design similarities across sets and year-to-year comparisons across countries over the spring, so hang tight!

The 1959 CFL cards (still 88 subjects) also shared a front design with the NFL cards and also had some design elements that were incorporated into the 1960 baseball series, especially in the lettering of the player's names: 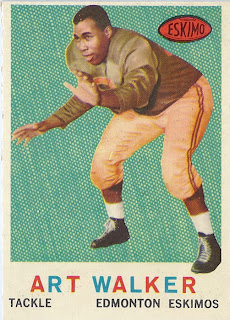 Backs once again are very similar to but not quite a hundred percent match with the NFL cards and French and English co-exist. 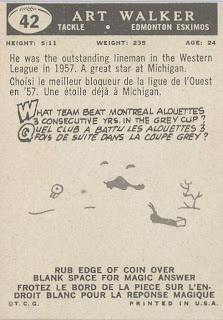 The Grey Cup, mentioned in the cartoon above, predates the professional league that now plays for it, much like the Stanley Cup does in hockey. I really like the idea of the championship game being contested for possession of a trophy that the winning team gets to display and then literally protect and wonder why the US sports of baseball, football and basketball did not follow this lead considering the history of the America's Cup.

Things start diverging dramatically in 1960 as a horizontal format is used: 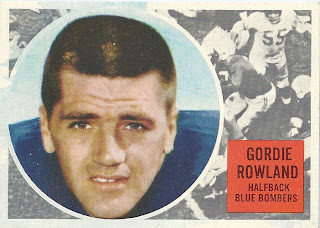 I quite like the b&w action background. Now, did this card combine some elements from the 1959 baseball (circular photo) and 1960 baseball cards (horizontal format)? Very possibly, says moi. Still, the set remained at 88 cards and the back, even allowing for the French, is very, very close to the NFL reverses: 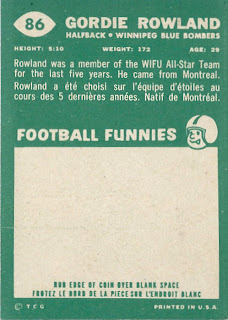 We will end today's foray with the radically different '61 CFL obverse as the set adds 44 cards to leave 132 subjects displayed in glorious black & white: 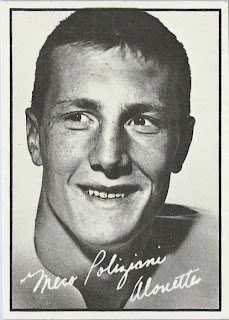 Once again, the backs are pretty close to the 1961 NFL cards: 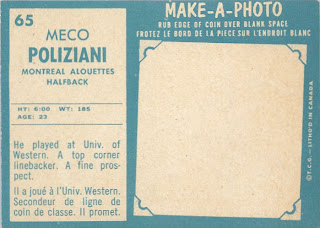 Next time out we will see even more dramatic changes-stay tuned!
Posted by toppcat at 7:49 AM