Catching Up on Coins and Cards

A couple of threads to update today kiddies, namely 1952 High Numbers and 1980 Baseball Coins, with a wide and wild detour back to Presentation Boards.

I have tabulated responses to my query on a few online forums that was cleverly titled "Where Did You Buy 1952 Topps Baseball High Numbers as a Kid?" The results were mostly supportive of my distribution theories but the sample size is way too small to cement anything except distribution may have been a little wider than I thought.

Confirmed purchases took place in a suburb of Toronto (nice to have that verified), Eastern Massachusetts (presumably Boston or environs), Elizabeth and Jersey City, New Jersey (both just across the North River from Manhattan), Ridley Park, Pennsylvania (a Phildadelphia suburb) and near the Smoky Mountains in North Carolina. These were late summer/fall 1952 purchases from what I can gather. North Carolina is interesting as it is well past the MLB territory of the time and gets us into the true South.

Looking westward, substantive purchases (two full runs from packs) were made by Roger Neufeldt of Sports Memories (one of the nicest guys you will ever meet) and whom I believe lived in Oklahoma City at the time of purchase (1952). That's farther afield than I would have thought and may demonstrate the spotty distribution the highs had in '52. Stabbing further westward we have Los Angeles, seemingly much later in 1952 and Rialto, CA,a San Bernardino 'burb in 1953 at a Rexall drug store (they had thousands of stores nationwide at the time) which is a connection I want to explore further as it may have something to do with the distribution of the cards. Woolworth's was allso a big seller of Topps 1952 baseball but I am not sure about their relationship with the high numbers.

There were also numerous stories of people not being able to find them in their neighborhoods after being able to find semi-highs. I did not track (yet) where they could not be found however but do note one such place was Buffalo, New York which I had previously theorized may hot have gotten the highs in '52.

There are also recollections of people buying the cards in 1953 wrapper sbut getting fistfuls of 52's. This brings up three good points: 1) Every account I have read involves highs from '52 only being bought in nickel packs, so were they sold in penny packs that year? 2) Does this explain why there are dated and undated wrappers (penny and nickel variants exist for each year) from 1953-55? 3) Did Topps therefore consistently "reload" the previous year's high numbers in current packs during this time and if so, why?

Questions, questions....now we move to an answer, or at least an advice concerning the population of 1980 Topps Baseball Coins with reports of Carew in Bronze and Silver:

All we need for a full player/metal Master Set is a Silver Jackson and Gold Carew and Garvey. Still no word on which ones have punch holes though.

Following the coins and their state of being, a few more presentation boards have shown upon Ebay. You may recall these were used for internal Topps "pitch" meetings and were most probably created by their Art Department. A few more details are known now (hooray) thanks to four pieces being auctioned by BMW Sportscards, alas one looks to have been sold and has disappeared but we have these still): 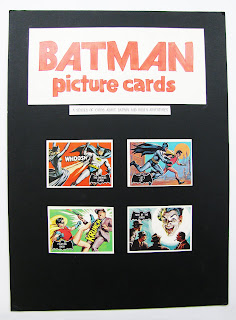 That's the 1966 Black Bat Batman Set, which shows how far back these go (which is around the time Topps moved facilities from Brooklyn to Duryea, PA). Here is the back of the board: 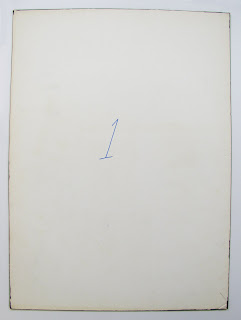 The numeral "1" makes a lot of sense as these would have been placed on large easels and handled manually, so an order of presentation would need to be established.

The next year a pitch was made for Crazy Comics: 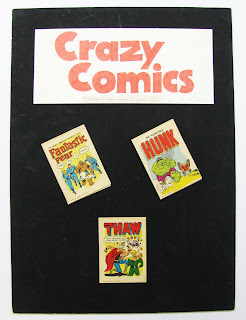 These would become a scarce set called Krazy Little Comics, which looks to have been both tested and then on a very limited basis, perhaps due to threat of a lawsuit or two from the companies the little comic books were parodying. The back loses the border but retains the numeral "1": 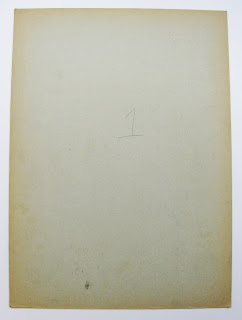 We then jump ahead to 1977 and the set that sold and sold-Star Wars: 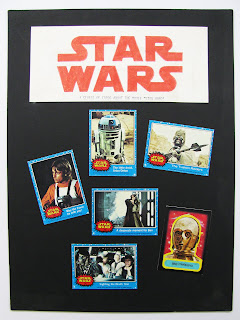 It's hard to tell here but the auction description indicates the C3PO sticker is original artwork-they painted his head over a 1976 Star Trek Sticker of Dr. McCoy!! We lose the numeral on the back for this one, so this may have been prepared for an initial review and not a full "pitch": 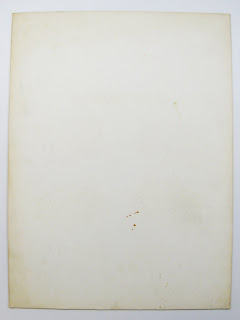 Sorry I missed out on grabbing a scan of the fourth board but ya snooze ya lose!
Posted by toppcat at 8:06 AM

4th board was for the Star Trek TV set.
Included 4 images not used in the final product.
1 image in the middle is missing - I believe was a shot of the Enterprise