We are going to (almost) wrap up the Topps Baseball Discs folks but a funny thing happened on the way to this post-I discovered the 1967's were probably proofed and printed up in late 1966. This follows a pattern found with the 1967 Punchouts, another set that went through what seems like a two year proofing process. The 68 Discs in turn look to have been proofed in 1967.

The 1967 set is comprised of 24 subjects and is sometime known as the "Silver Foil" set as the waste area beyond the circle with the player photo and information is silver reflective paper. Almost certainly designed to be pinbacks, these were to have been manufactured in Japan from Topps artwork and then imported into the US, a key bit of detail we will return to later.

A full proof sheet of 67's is known, although it has almost certainly been cut up: 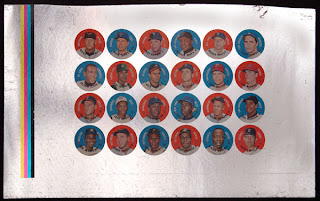 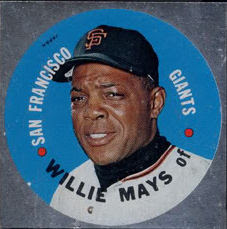 You can clearly see the word JAPAN in the upper left quadrant. The back looks like this: 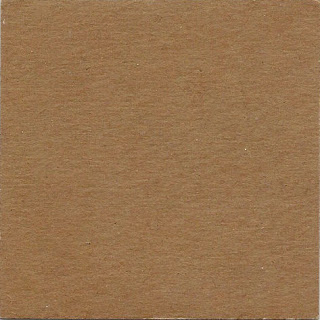 The '67 San Francisco Giants team discs also have the same back. The 1968 Discs, which add four subject to the mix for a total of 28, can be found with both Silver Foil and Plain White backgrounds, the latter of which usually sometimes have a horizontal fold that may indicate a sheet being saved by a dumpster diver of decades past.

Here is a Silver Foil '68 from the collection of Bob Fisk: 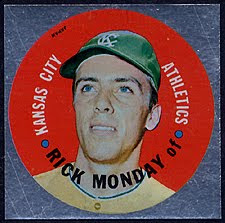 I am not sure if the back is the same brown cardboard found on the 67's but suspect it is. That's one of the things about the 68's-they are appreciably rarer than the 67's, despite what PSA and Beckett say and I have not been able to find scans of either a full proof sheet nor all of the individual discs from 1968. As you will see below, they have the JAPAN notation as well.

Having said that, the Monday disc really convinces me the All Stars were designed to be one set issued in 1967 as the A's were still in KC that year. The 68's should really be thought of as a second run of proofs. There's a little more on the production cycle further below but I will continue to use the commonly accepted dates for these two sets.

Here is a '68 Alley I have shown previously, front: 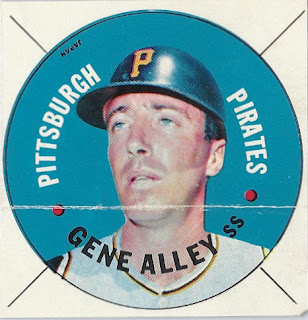 And back (look closely): 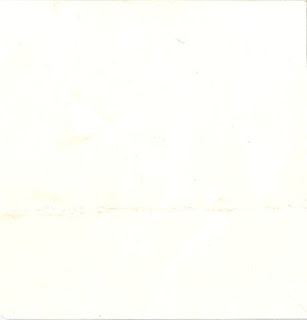 A few progressive proofs are known for the 68's. Here is a scan of a Cepeda series from that year I nabbed from Ebay: 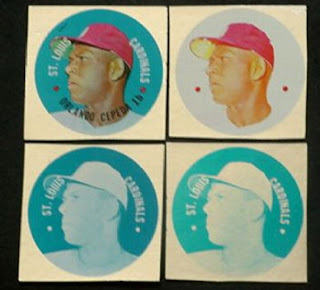 Compare those and the Alley above to a very interesting Cepeda scan from an unknown source that looks to have had a thin plastic film overlaid in addition to a ring showing where the pin would be cropped. The clear overlay seems to have stripped off in spots. Note the fold line is similar to the one on Alley and JAPAN would have been rolled over the rim and oriented correctly on the reverse of the pin: 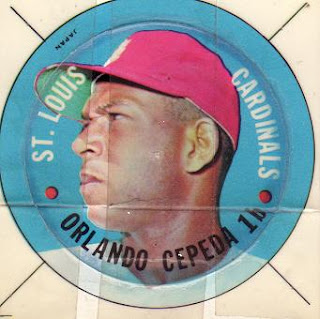 I will warn you that the next scan is a fake, merely a fantasy concoction sometimes sold on Ebay but it gives a good idea of what a completed pin or button would have looked like, using a '67 Torre:

Here is a combined list of both 67's and the 68's and you can see that only one player, Willie Mays, appears in all three disc sets:

In order to simplify matters, here is another list showing just the All Stars from both years with their team affiliations. Eleven players appear in both sets and a further post will try to differentiate years for these players as I do not have scans for all the doubled up 68's. I'll also show how the photos used on the discs tie in to the 1967 Punchouts and 1968 Baseball Plaks Checklists among other things when that post gets written.


* Tommy Davis should be with the Mets in the '68 set as he would be the only one in that set and each team has at least one representative. He was traded by the Mets to the White Sox on 12/15/67. See further comments below on last possible production date.

** Johnny Romano was traded from the White Sox to the Cardinals on 12/14/66. This indicates the first batch of proofs were almost certainly prepared prior to that date.

The production cycle for both sets looks to have less than a full year as the A's were given permission to move to Oakland by the American League on 10/18/67. A set that was in process in December of 1966 was certainly intended for release at the start of the '67 baseball season in any event and would seemingly have concluded production by the time the A's were given the go ahead to relocate just after the end of the 1967 World Series.

If you are counting teams the AL and NL had 12 discs each in the 67 All Stars and 14 in the 68's, color coded Red (AL) and Blue (NL). As noted above with the 1968 Tommy Davis Disc, each team had at least one player in each set. In 1967 the Orioles had a total of three players shown in the AL and the Braves and Giants each had an extra representative on the NL side. In 1968 The Orioles and Tigers each had an extra man while the Twins had two more than most. The '68 NL squad had the Braves and Giants again with an extra player each and the Pirates had a surplus of two. I am calling the players All Stars but it doesn't mean they made the mid-season classic in '66, some guys did it before, during and after that season. A few were only one time All Stars and the "scrubinee" player selection seems a bit odd. Perhaps more players would have been added later.

So with all this effort,what happened, why did the pin sets never materialize? Well, I found an old reference to import duty suit filed by Topps to try to have the pins classified as "buttons" vs their being labeled "novelties" (don't quote me on that, I may have it reversed). I lost the link but seem to recall a 10% import duty for one category vs 35% on the other hanging in the balance. I believe Topps finally lost the case in 1971 and have to think the difference in nomenclature was enough to kill any potential profit margin on products imported from Japan for sale in the US under the more expensive duty assessment. If I find the link again, I'll post it down the road.

Topps had produced metal coin inserts in 1964 and would do so again in 1971, presumably in the US, so I wonder if this was an attempt on their part to manufacture certain items more cheaply in Japan. I believe a couple of non-sports pin sets were made in Japan around this time but would have to dig a bit to determine which ones.

If you have any 1968 disc scans of any of the eleven repeated players, please send 'em along!
Posted by toppcat at 8:27 AM