We're back, with a second installment of the Topps Canadian Football League issues. This time, we'll take a peek at the last four years of Topps branded cards.

1962 brought another black and white set but with a twist: 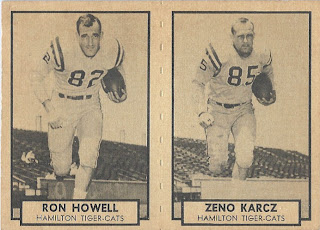 Yes, these cards were actually minis when separated-yikes! While the 1962 Topps US football cards do have a small b&w picture they in no way resemble these. Issued in a series of 169 small cards, some are repeated with different partners on the larger "panels". I cannot find a reference showing how many different panels exist but would think 132 is a possibility. The mystery should be solved soon though as a top notch CFL card price guide is about to be issued (that link will work by the end of March 2010 by the way but you can contact the author now for more information: amalycky@telusplanet.net ).

The reverses on the 62's are also radically different from the US cards: 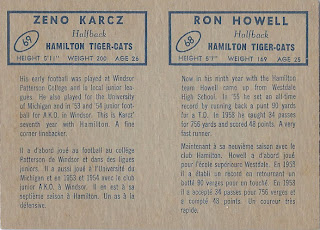 After two straight black and white sets, 1963 brought a nice change of pace: 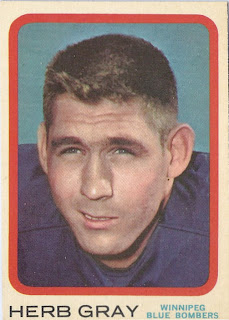 A nice clean, simple design with a large picture area always works wonders on a set of cards, although these are a bit austere compared to what was going on south of the border in '63, where Topps was starting to use some daring designs on their FB cards (we'll get to those eventually, no worries) although it would take them a couple of years to get fully revved up.

88 CFL cards were issued in 1963 , so we are seeing a decline in production and I have to believe that the cards were not selling all that briskly. Indeed the attendance at CFL games with their smaller stadiums in this era was less than that in the US by more than half on a per game basis and there are just not as many Canadians as there are Americans, so the numbers may not have been adding up too well for the bean counters.

The reverses in '63 were part of a growing trend where Topps put interactive backs on many sets: 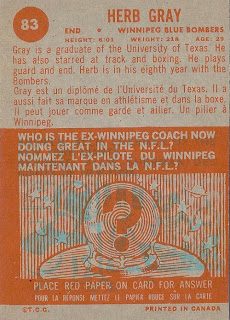 Those closely mirror the US reverses and you needed some red cello paper to check the quiz answer.

1964 brought dramatic changes and a hint of daring design at last, in another 88 card set: 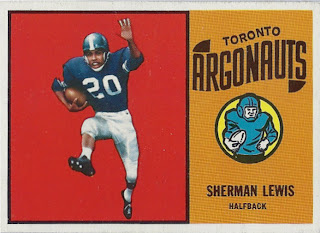 Bold colors! The reverse would see a major design element repeated in two years on the backs of some Batman cards (Go here if you were a fan of the Batman TV series --still the best show ever in my book-- from 1966-68; I promise it will be worth your time) and were completely different than the US backs: 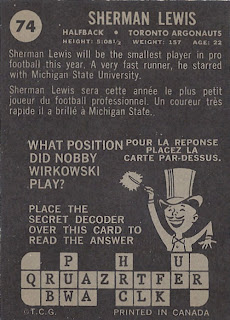 Again, you needed a special decoder to reveal the answer. These full bleed backs, a CFL card staple, make things tough these days if you collect mint cards! I have to say "Nobby" is a great nickname....

Topps ended their first CFL run in 1965 with what I consider their nicest looking card from these eight years, although they in no way, shape or form resembled the 1965 US cards: 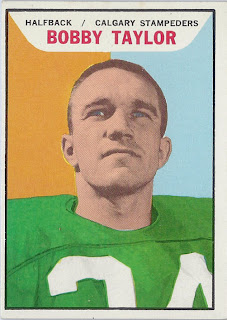 We have 88 cards again with a really well-designed obverse. The backs are also pretty nice: 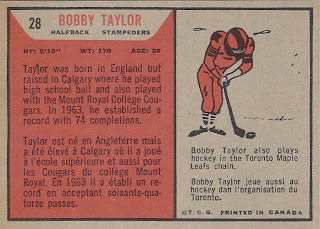 and actually share some design elements with the 1964 Topps hockey cards and 1965 US football cards, which are both infamous "tallboy" sets.

Topps would return to Canadian Football in 1968 and haltingly issue CFL cards for a few more years through its O-Pee-Chee arm. We'll take a look at the OPC cards real soon but will be back with a post on the 1960's CFL inserts before then.
Posted by toppcat at 10:46 AM

is that the Bengals Sherman Lewis?