Across The Pond With The ACC

This will be a final look at the 1953 American Card Catalog's advertising section, previously discussed here and here. Today we are traveling to Merry Olde England, where the hobby of collecting "cigarette cards" was a bit more established (and respectable) than in the Colonies.

While probably not the first firm to sell tobacco cards to collectors, The London Cigarette Card Company certainly the oldest still in existence today at 85 years young and the source of many cards in the hands of U.S. collectors. I remember being hugely disappointed the first time I was in London and finding out they had moved to the countryside about fifteen years earlier: 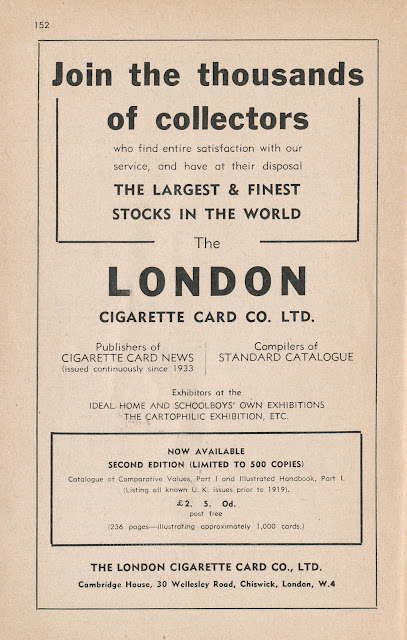 You can see they were already on their second price guide by 1953 and collector's conventions were already established.  Cigarette Card News has since been renamed Card Collector's News and is a relatively youthful 74years old. Their managing director, Ian Laker, was responsible for putting this crisp and succinct guide together on A&BC's cards: 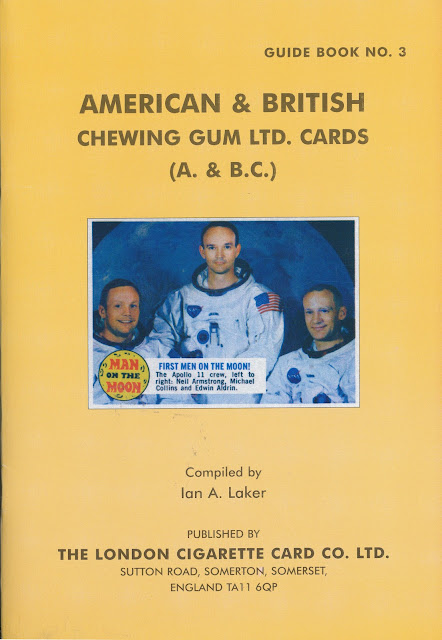 That is the 3rd (and latest) edition from 2004.  You can still order it, along with many other reference works, from LCCC if you are so inclined. A&BC cards have been discussed here a couple of times and will be looked at again in more depth sometime soon.

Here is an intriguing enticement from the Universal Cigarette Card company.  Having been to London many times in the past (although sadly, not of late) I highly doubt you could fund your trip by selling off your duplicate tobacco cards even in their postwar recovery phase: 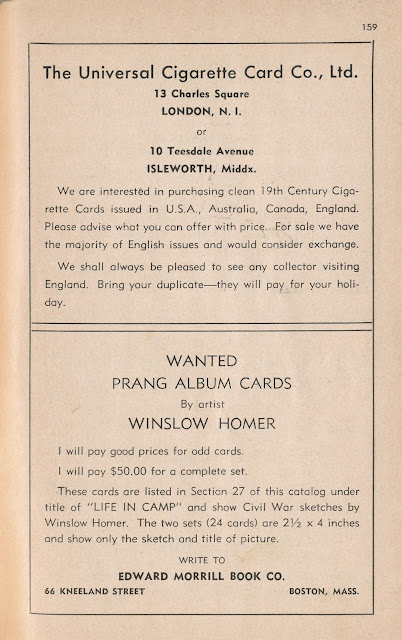 I've left the Edward Morrill ad in this image as it helps show the wide range of paper goods being looked for by advertisers in the ACC. Those Prang Album cards by Winslow Homer are quite famous and still coveted today.

Edward Wharton-Tigar, perhaps the most famous collectors ever and one of the few to warrant an obituary in The New York Times, also took out a small ad, looking for trade partners:

There are a handful of other ads from England included, even one from Italy but I'll conculde with one from The Cartophilic Society of Great Britain, publishers of the landmark World Tobacco Index, which was the first great compilation of cigarette cards: 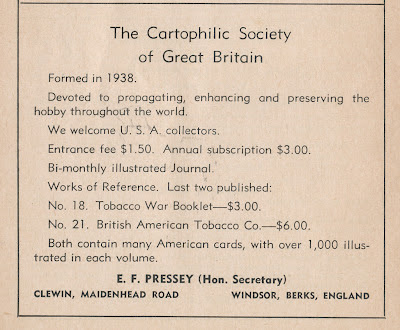 The Cartophilic Society of Great Britain is still with us as well, still producing guidebooks and offering a lending library of reference books to members.


The hobbyists who advertised in the 1953 ACC were persevering sorts who had developed a system of trust since all trading was done though the mail and often with people you had never met. It could take weeks, if not months, for cards to arrive on one side of the Atlantic Ocean from the other.  While today we have almost instantaneous transactions and cards can be sent halfway around the world in two days, the trust level is quite a bit lower and we are all the worse off.