Ahoy!  Piracy has been a scourge of the seas for almost as long as there have been sailing ships. Today we think of it in two ways: the traditional one where ships are taken by force by marauders and also as theft in the digital domain.  Topps  certainly understood the principle as it blatantly copied images from 19th Century sets issued by Allen & Ginter in 1949's X-Ray Roundup.

Here is a 1949 Sir Henry Morgan card, as issued by Topps:

He looks pretty clean for a pirate but no matter.  Now, look at this card issued by Allen & Ginter, circa 1888 from a set called Pirates of the Spanish Main and listed as N19 in the ACC: 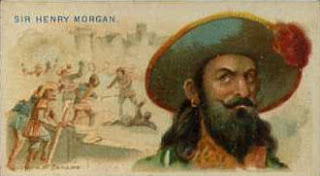 Pretty blatant methinks! Of the 50 Pirate cards in N19, it looks like most, if not all 45 of the Pirates in X-Ray Roundup were copied by Topps (I haven't checked them all but plan to).

Topps did the same thing with all 50 Indians in X-Ray Roundup. Here is Topps' version of Geronimo:

And here is the image from the set referred to as N2, Allen & Ginter's Indian Chiefs of 1888: I greatly suspect Woody Gelman's firm was the one that supplied the artwork in 1949.  Since Woody was an inveterate collector of 19th Century Cigarette cards, this makes some sense.  He even advertised for these cards in his 1953 ACC ad, which I showed a few posts back:

The images had probably seen their copyrights lapse, so this was not some huge artwork ripoff but it was a great way for Topps to come up with cheap source material.  Bowman would do the same thing in a couple of sets after this and the 1930's were filled with actual cases of image piracy, especially among strip card Manufacturers.  With Woody and Topps doing it, it almost seems Arrghhhhhhh-tistic!
Posted by toppcat at 4:50 PM