ACC, You Know Me

Most, if not all, vintage collectors have run across the American Card Catalog as they assemble sets and compile wantlists.  Jefferson Burdick's masterwork saw four major editions, the last of which came out in 1960 which is the one most familiar to almost all current collectors.  It's the ACC that gave us descriptions such as T-206, R414-1 and C46, although most collectors do not use such nomenclature anymore for issues that came out in 1933 or later. Back when almost all hobby information was done via the U.S. Mail though, such numbering schemes were quite helpful.

This is not intended to be a brief history of the ACC; there are a couple out there already (one is mine in The Wrapper #262 and Geroge Vrechek has written extensively on Burdick and the ACC over in the Library section at www.oldbaseball.com ) and a major one is in the works from what I know if it.  Rather I want to look at one editor and two ads in the 1953 edition.

Jefferson Burdick had ceded some editorial control by 1953 and Charles Bray, Gene De Nardo and Woody Gelman had been added to the masthead.  Woody was listed as the Associate Editor in Charge of Advertising and Publication, a job which likely meant he had access to a printer that could run the catalog off cheaply (it retailed for $2) and that he coordinated the ads, of which there were 21 pages out of 168 total.  One of the ads though, was a real beaut: 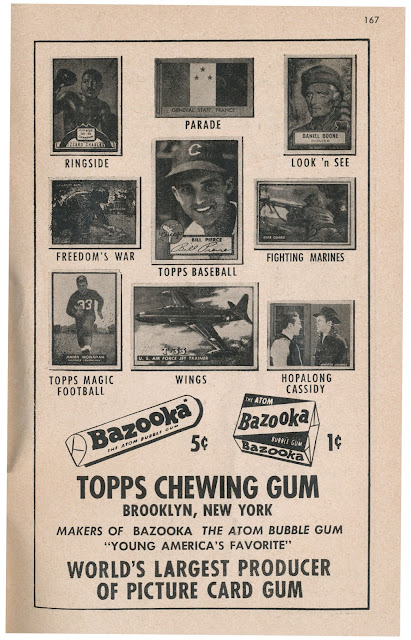 Wow, right?! Woody clearly knew in advance the publication details and worked to have a super advertising piece made up. The great thing about this ad, other than its inherent wonderfulness, is that is shows some major Topps issues up to the end of 1952 (the guide was published in February 1953 and contains no references to any 1953 issues). Wings is clearly a 1952 issue, as is Look "N' See, while the ad touts sets that were released as far back as 1950. The Non-Sports Post War listings also prove this out: 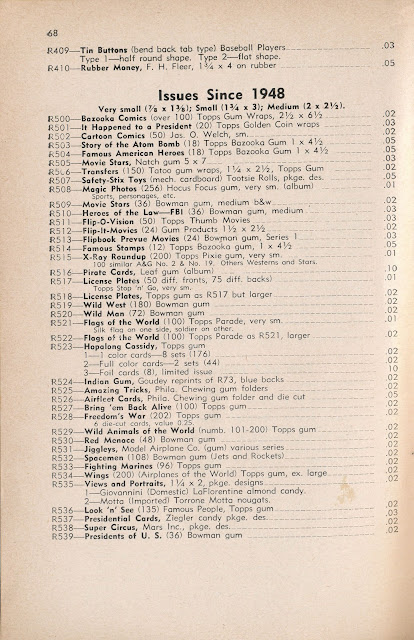 You can see details of the full releases of the multi-series Wings, Look 'N' See and Fighting Marines (thought by some to be a '53 issue) sets. It is also obvious the numbering scheme used in 1953 changed by the time the 1960 edition was released and the latter is what has been "locked" into collector's minds.  Wings, shown above as R534, is known today as R707-4 while Look 'N' See, above as R536, is now R714-16. I am fairly certain these sets in this section were shown in their order of release (or as close as possible for the time) as compiled by Gene DeNardo.

As for Bowman, they had an ad but it paled in comparison to Topps': 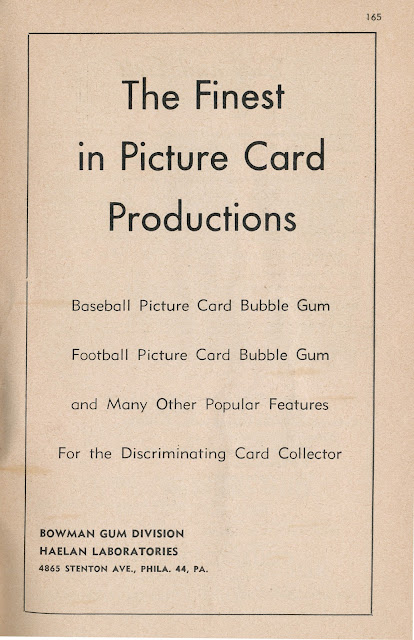 Warren Bowman had been gone over 18 months by the time the '53 ACC was published and I suspect he would have come up with something a little splashier had he still been around. That ad just reeks of corporate stuffiness.

The guide itself is very well made.  I have a copy that was clearly used for years back in the day (and gets quite a bit of handling from me as well) and while the cover is a bit creased, the interior pages are holding up remarkably well, as is the binding.  This is good news since it allows us to take a clear look at some advertisers of the day.  Here is a "permanent" want list from Woody Gelman himself: 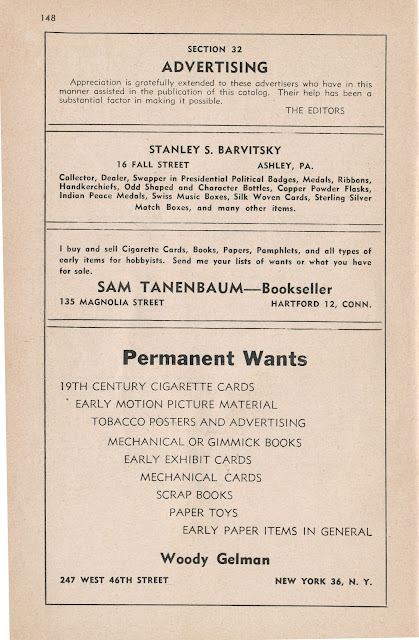 That street address for Woody is the office of Solomon and Gelman at the time. S&G was an art service that did a lot, if not all, of the illustration work and design for Topps commencing about 1949 and Ben Solomon would eventually end up as the Art Director at Topps in the 60's and 70's with final say over all released printed product.  Woody seems to have come in-house at Topps while still working as a partner at S&G until at least 1957; at some point around that time he became a full time Topps employee. Ben and Woody probably first met at the Fleischer Brothers animation studio in the 1930's and a lot of early Topps employees and artists worked there as well.

Another well known figure who advertised in the '53 ACC was Dr. Lawrence Kurzrok, a famous early collector and facilitator: 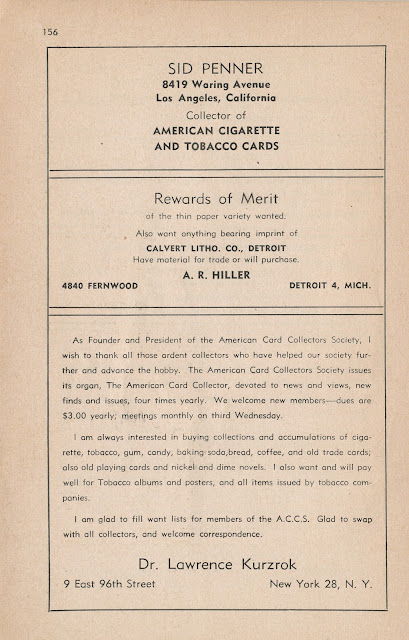 Dr. Kurzrok was very early on aware of Topps: 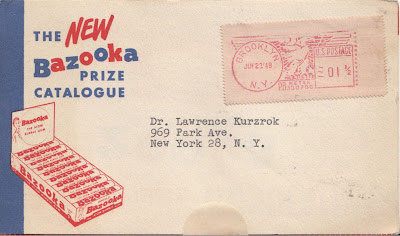 I'll look at some more advertisers in the '53 ACC next time out, even though they are not really related to Topps, as it's just a fun area of the hobby to explore.


(Apologies if this post displays incorrectly-Blogger is doing something weird to my vertical spacing and I have no idea how to control it-yikes!)
Posted by toppcat at 5:47 PM

"The Finest in Picture Card Productions" yet they placed and advertisement with no pictures. Oh, Bowman, were you even trying?