As I was preparing the previous post here at the ol' Archives, concerning the copying of certain 19th Century artwork by Topps, particularly Indian Chiefs and Pirates, I decided not to use Captain Kidd in the comparison. However, as I was looking at the various examples of his cards, I noticed something neat.

Take a look at this N19 of Kidd, which I cribbed from Cardboard Junkie: 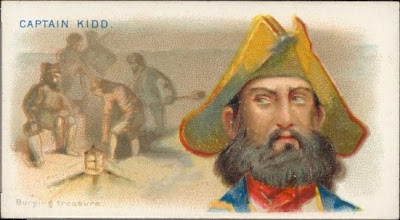 Now, we know form our previous post that the images from this set were used by Topps for X-Ray Roundup in 1949:

I have to say the image of the Captain hanging from the gallows is quite picturesque..... 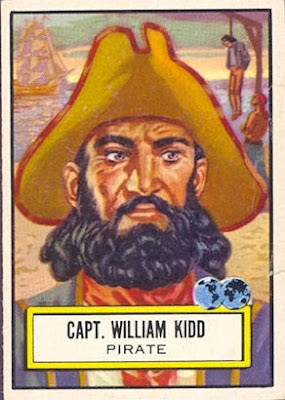 Wow-it's almost an exact match to the one from '49 but on closer inspection it's redrawn. 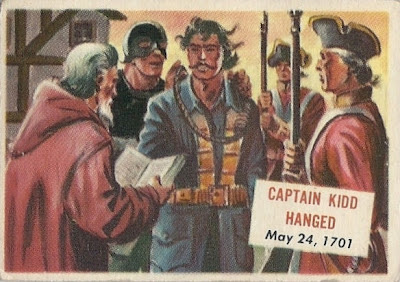 
I thought the chain was broken but then I looked at the flipside: 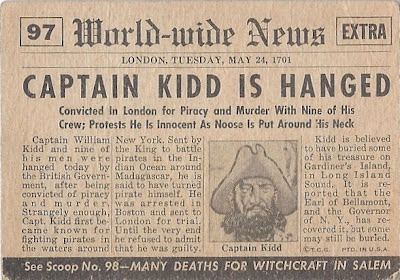 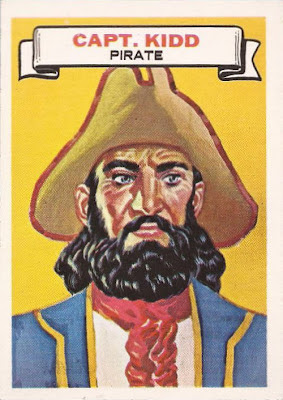 This is actually bad news-now I will have to do a comparison not only of the 1888 Pirates of the Spanish Main set with X-Ray Roundup but of Look 'N' See to Scoop and on to Who Am I? as there are numerous subjects shared by all these sets.  Sigh.....

(Apologies again for the vertical spacing. Something strange is happening with Blogger and I can't figure out how to fix it.)
Posted by toppcat at 5:39 PM

I've been blogging about cards so long I don't even remember posting that Kidd card. I'm also having massive formatting issues with Blogger so it's not just you. I think something's wonky with the images right now.