One of the more enduring hobby stories has been that 1952 Baseball high numbers could be found in 1953 Baseball packs, especially in Canada.  I'm pretty sure I know why this is so but have never really made the full connection until now.

As discussed here previously, a normal five cent 1952 pack is predominantly green and red.  Two varieties of this pack were issued.  The first, as this example from Cardboard Connection shows, is horizontally aligned and has two side panel ads.  One touts the new Giant Size cards within, while the other extolls a premium offer for baseball pennants: 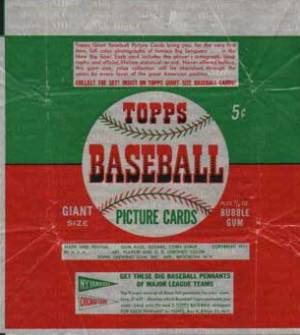 Above the pennant offer is a block of information that includes a 1952 copyright date.

Topps also came out with a very similar wrapper but changed the "Giant Size" ad panel to one advertising baseball emblem premiums with just a short line about the Giant Size cards.. The webmaster at 1952baseballcards.com thinks these only held first series cards only but I am not so sure it was limited to only that series, for reasons that will be revealed momentarily: 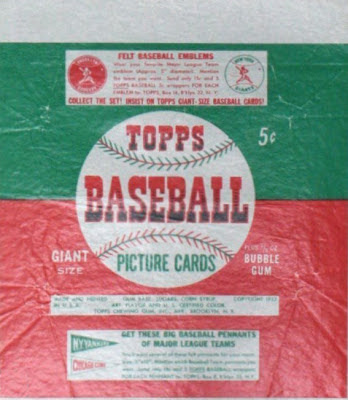 The above wrapper is from a Huggins & Scott auction and you can see the emblem ad atop (the wrapper is not fully shown).  These are much harder to find than the other variety which would support the first series only theory but when the high numbers came out, Topps used the  above variety, replacing green with blue, so they may have been used here and there as needed (or found in the warehouse): 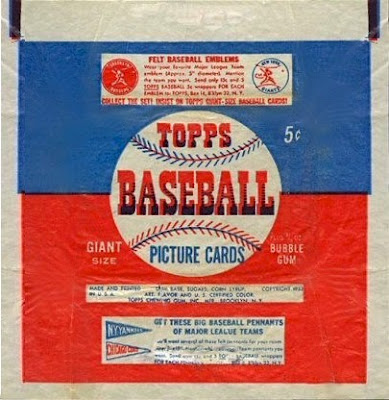 So the "emblem" wrapper was either trotted out again or the continuity is all screwed up, which is always a possibility with Topps. That blue block of color also appears jury rigged-look at how it does not seamlessly transition to the red portion of the wrapper.

Compare the high number '52 wrapper with the regular 1953 wrappers and you can see why confusion exists.  Here is the earlier 1953 wrapper, with clear dating: 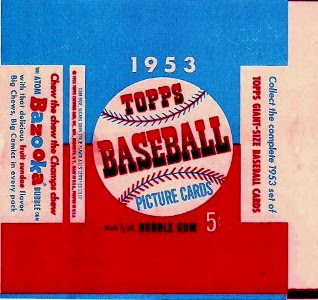 Once again using a scan from Cardboard Connection, you can see the orientation has changed to vertical and the baseball design element has been rotated a little.  This version clearly identifies 1953 on a side panel and moves the copyright from upper right corner in the ingredient panel to lower left (and it's in a red font to boot).  The Bazooka ad though, is so prominent the other differences are almost moot, although the '52 uses a darker blue.

The undated version of the wrapper keeps the main design elements, as this eBay scan shows, but loses the "1953": 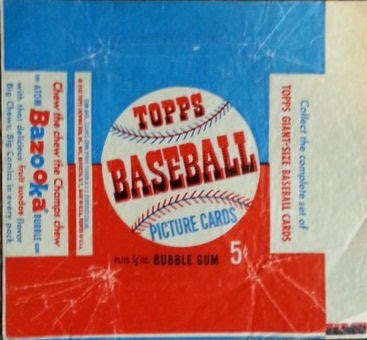 Interestingly the 1953 dating on the right side panel is gone, to match the removal of the date on the front.  I think Topps did this as the year wore on to allow sales to continue after the season ended.  It sometimes took many months for each series to be fully distributed across the U.S.

Now any theory concerning Topps is subject to something coming out of left field to dispute it but I think the similarity of the 1953 wrappers with the 1952 high number packaging is one reason veteran hobbyists think the '52 highs came in '53 wrappers. There are also reports of 1st series '53 packs having 52 high's mixed in with them out there so there may be something to that as well.