Your webmaster managed to snag a couple of scans, albeit not the card, of what I believe to be the final card in the "small" 1955 Hocus Focus set.  As we have seen here previously, this set was issued in 1955 in two different sizes and lengths.  The larger cards have 96 in the set, the smaller ones go to what has been a vague number but generally thought to be 121 or 126. As faithful readers of this site know, 126 is the likely ending point.  Thanks to eBay we now have a picture of #126.

Yes, what youngster in 1955 did not want a card of Louis Pasteur?! It's a little light but I would have been happy to take it.  Alas, I was too late!  Here is the all important back though: 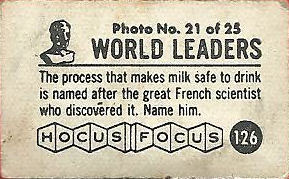 I still need to see a representative card back from some of the subsets in the small issue but I am convinced the set goes to and ends at #126 now. Even as things get to that point, there are still holes in the checklist above #96. Crazy!