A while back I included a scan of a pretty well known Joe Garagiola business card produced by Topps in 1976.  It featured the man who made Yogi Berra a sage in an airbrushed  chest protector on a very well done version of a 1973 Topps baseball card.  I had known at the time there was also a 1991 version of the card but did not have a scan handy for posting.  I have since managed to snag a scan off eBay of one and there is a design difference or two worth showing: 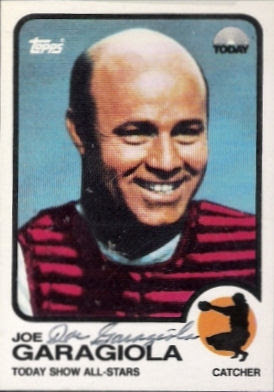 Ignoring the autograph, which was not part of the design, the cards features the 90's Topps logo and a Today Show logo. He is also shown as a "Today Show All Star" and not an "NBC All Star."  As you can see here, the 1976 version had none of these elements: 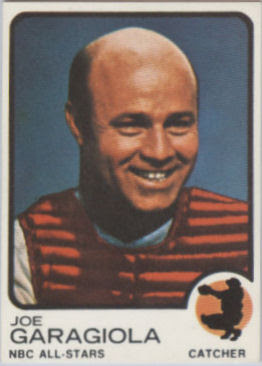 I always wondered why an updated card was made by Topps and it turns out Joe rejoined the Today Show in 1990 before leaving again in 1992 (he had been there previously from 1967-73). The original baseball card was produced since he was member of the broadcast team for Monday Night Baseball  on the network at the time, in addition to some other duties.